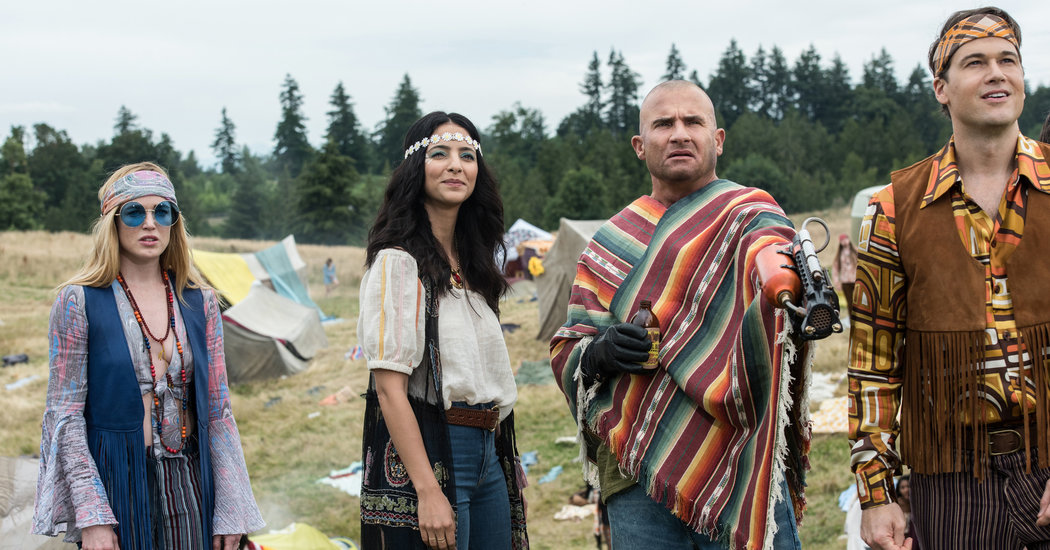 The heroes of "The Morning Legends of DC" return to avoid another threat. And the final season of "Rake" comes to Acorn TV.

DC LEGENDS OF TOMORROW 9 p.m. in the CW. Last season, the legends rejoiced after killing the demon Mallus with a giant stuffed animal. In this premiere of the fourth season, the team joins Ava (Jes Macallan) and the Time Bureau to deal with the remaining anachronisms, but they reach a big hump when they discover that their defeat of Mallus unleashed a wave of deadly magical beings in the whole timeline. Their search for evil unicorns, fairy godmothers and other deceptive creatures takes them to Woodstock.

STOLEN DAUGHTERS: KIDNAPPED BY BOKO HARAM (2018) 8 p.m. on HBO In 2014, 276 Nigerian girls were abducted by Boko Haram, an extremist terrorist group, and taken to the Sambisa Forest. Three years later, 103 returned to their village. This new documentary captures its readjustment to ordinary life and resumes the night of the kidnapping with heartbreaking testimonies.

YOU. & TINY: FRIENDS AND BEAUTIFUL FAMILY 9 p.m. in VH1. One year after the reality show "T.I. & Tiny: The Family Hustle "concluded his six-season career, the Grammy-winning rapper and his family returned for this new show.This time, they were joined by some friends from Houston: singers Monica and LeToya Luckett and author Toya Wright Each member of the cast has his fair share of luggage, so he expects a ride on a roller coaster of drama.

Half of the image (2018) 9 p.m. in Starz. Director Amy Adrion talks about gender inequality in Hollywood through interviews with Ava DuVernay, Jill Soloway and other women in the film industry who share the struggles and joy of working in the business. Adrion also talks with experts and government officials who point to research that demonstrates systemic gender discrimination and the effects of overcoming it. In its For the New York Times, Teo Bugbee wrote that if something is missing from the film, "it's the effect that sexism has on these women's art, not just on their livelihoods." She adds: "As a result," Half the Picture "becomes an involuntary example of the impossible union that filmmakers face."

RAKE in Acorn TV. The lawyer at the center of this brazen Australian legal drama has made a name for himself as a rake (read: bad boy) in the legal world of Sydney. Whether he's in court or in the bedroom, Cleaver (Richard Roxburgh) resorts to his charm to win over people. And it works, even though he prefers to represent the guilty clients. In the fifth and final season, Cleaver sails into his new career as an independent senator just as a gas terrorist attack hits the House of the New Parliament.

Red table conversation 12 p.m. in Facebook Watch. Will Smith sits with his wife, his daughter and his mother, who are the hosts of this program, to converse from heart to heart. Among the future guests are actresses Leah Remini and Ellen Pompeo and rapper J. Cole.