Jiaxin Lu's fingers slide over the keys. Sometimes they push the strings harder, sometimes milder. The melody makes the Basel train station ring. The 21-year-old Chinese woman has put her smartphone on the music stand. Then she searched for notes from a Chinese composer – in vain. But the notes she knows at least, and nothing distracts her from her game. People stop, hear. Jiaxin Lu ignores her; If a thief steals the backpack, she would hardly notice.

"I get into the keys, so I'm in my own world," she says later. Hong Kong Chinese studies in Sweden and traveling through Europe for a few weeks. She will be in Basel for two days. She accidentally came across the station's piano. "If I see a piano, then I have to back it up."

Spontaneous opportunities to play, harmonic islands, to take a break in the hustle and bustle of train stations: That's what they stand for, the station's pianos. They are sponsored by a Bern music house. The idea had others. In Switzerland it was the first time a retired veterinarian from Aarau, who has put a piano on the station privately and in consultation with SBB. SBB was pleased and launched its own project in 2017. 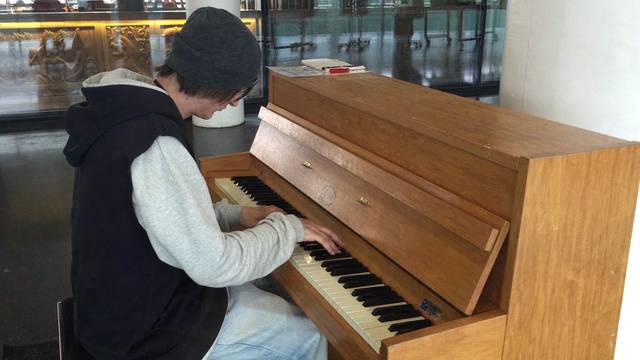 Meanwhile, there is an SBB-owned piano schedule that shows when and where a piano stands: There are currently four instruments at the railway stations in Basel, Olten, Bern and Geneva. But now the SBB reduces the supply. "Decrescendo" is announced. In January and February, only one piano will be heard in Olten and Liestal. Then Solothurn, Thun, Yverdon and Rapperswil will be the scene, later Bellinzona and Lucerne. And at the end of April, the first thing is over.

But why the reduction? "For climatic reasons," write SBB, "the low temperatures and low humidity do not make the instruments so good." How it happens in the hot summer months, it is still unclear.

Does the process possibly have something deep Swiss? An idea becomes a project, then it is regulated and structured – and ultimately scraped?

In any case, many people at the Basel railway station are happy when strumming stops. From many of a shop assistant, the piano was not only due to temperature and humidity variations.

The seller of a souvenir shop, which presents tourists watches and pocket knives with Edelweiss motif, says she is fundamentally positive about the project. "But some have played all day and playing the piano can also be difficult for us. Some of us work here from morning to night." The sliding door opens. Now there are harmonic sounds that penetrate the store. "This is usually the case," admits the souvenir seller. And yet: "For example, one who puts the cap on the piano and wants money. He plays very well, but very aggressively and loudly. And then the pieces repeat themselves." SBB officially says the feedback is consistently positive.

A musician who played for money in Basel was sent away. He now shows his skills in Bern. There, in the upper floor of the station, the same pianists meet day after day. Their sounds can be heard day in, day out in the hall two floors below and up to the railway track or the station square. Above it was created a kind of schedule that resembles the clock plan of SBB. Many of the pianists come daily, a few times a week. Often at the same time.

Even the retired teacher Heinz Matzinger is one of them. Matzinger calls his style pseudo-classic. At the teacher's seminar he had had classical piano training, but it was a long time ago, says 74-year-old. "I come almost every day, and when I play, I play two or three hours on a stretch. The music keeps you young." Matzinger is impressed by the potential of slumbering in the population. "The beautiful," says Matzinger, "you do not look at the people." Matzinger remembers a young man who has driven specifically: "With his hoody he really didn't look like someone who plays the piano. But then he sat down on the instrument and just put the Goldberg variations by Johann Sebastian Bach."

A marginal man trusts with his dog. He stops and listens to the pianist who plays a boogie-woogie. Then he passes Teacher Matzinger and complains: "The most important thing is not that the teacher is sitting by the piano, which always plays the same."

Roger Waters in the audience

Later, Jerry Grossmann and Andrea Costantini play duets at the Bernese station piano, two practiced bars and hotel pianists. "When I have time, I come here and play a few," Costantini says, and Grossmann adds, "I played before Roger Waters. And at home I have a studio. But once a week I get inspired by others or play something for myself. "

Some listeners laugh, others take the time to leave. Costantini and Grossmann probably do. Her speech shop is lost in the noise level of the station.

The next takes place and hits his music in the keys.