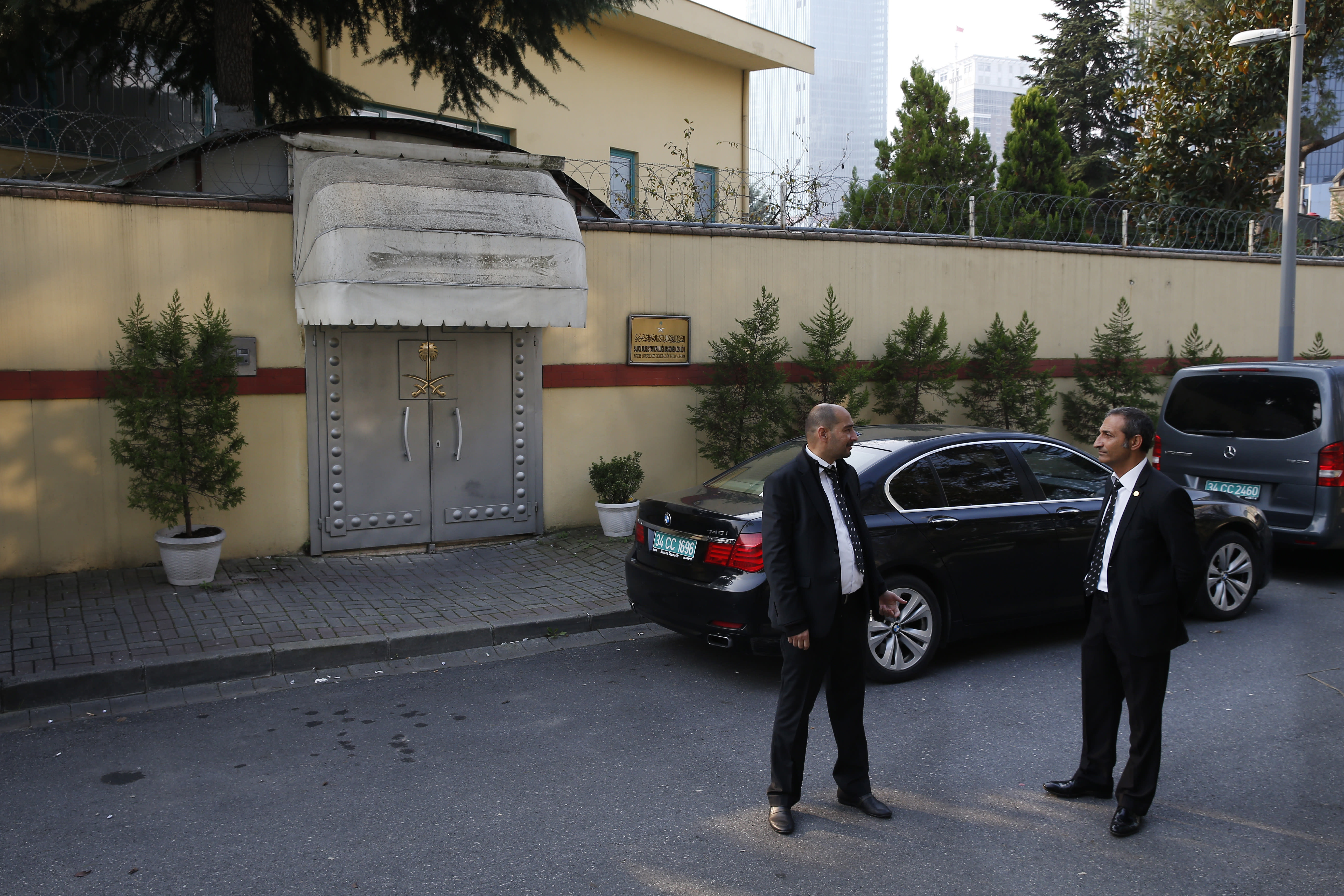 ISTANBUL (AP) – The latest on the consequences of the murder of Saudi journalist Jamal Khashoggi at the kingdom's consulate in Istanbul (all local timetables):

Turkish crime scene investigators have arrived at an underground parking lot in Istanbul, where authorities found a vehicle belonging to the Saudi Arabian Consulate.

A large police van arrived at the parking lot in the Sultangazi district of Istanbul on Monday. The news reports say that the car was left there two weeks ago.

Investigators investigating the disappearance of Saudi journalist Jamal Khashoggi had searched other consulate vehicles last week, along with the consulate building and the residence of the consul general.

Saudi Arabia said on Saturday that Khashoggi was killed in a "fist fight" inside the consulate. Turkish media and officials say the 59-year-old Washington Post columnist was attacked by a 15-man Saudi team that cut off his fingers and decapitated him.

His remains have not been found yet.

Anadolu Agency said on Monday that the vehicle with diplomatic plates was discovered in the parking lot in the Sultangazi district of Istanbul, about 15 kilometers (9 miles) from the consulate building, where Saudi journalist Jamal Khashoggi was killed.

The agency says that authorities must obtain a permit from the consulate and the Istanbul attorney general's office before registering the vehicle. Last week, other Consulate vehicles were registered, along with the consulate building and the residence of the consul general.

Police sealed the entrance to the parking lot, the agency said.

Saudi Arabia acknowledged Khashoggi's death on Saturday, saying he was killed in a "fist fight" inside the consulate. Turkish media and officials say the 59-year-old Washington Post columnist was attacked by a 15-man Saudi team that cut off his fingers and decapitated him.

Speaking to reporters on Monday, Omer Celik, a spokesman for Turkey's ruling party, rejected "immoral" suggestions that Turkey was delaying the announcement of the findings of its investigation into Khashoggi's death because he was involved in an alleged process of " negotiation "with Saudi Arabia.

Celik said: "We are facing a situation in which it was brutally planned (killing) and efforts were made to cover it up."

The official said that Turkey was conducting a careful investigation to ensure that "no one is falsely accused" and that the incident is not covered.

"God willing, the results will be made public, those responsible will be punished and no one will dare to think about carrying out such a thing again."

Saudi authorities said last weekend that Khashoggi was killed in a "fistfight" with Saudi officials at the consulate on October 2, after initially insisting they knew nothing about his whereabouts.

The executive director of the German industrial conglomerate Siemens says he will not attend this week's investment conference in Saudi Arabia. He is the last to withdraw from the event following the assassination of Saudi journalist Jamal Khashoggi, who was assassinated at the kingdom's consulate in Istanbul.

Joe Kaeser wrote in a LinkedIn post on Monday that he had "received hundreds, if not thousands, of emails and social media posts urging me not to attend the Future Investment Initiative Conference."

Kaeser said Siemens has been "a reliable partner" for Saudi Arabia for decades "but for now, the truth must be found and justice must be done" in Khashoggi's case. He stressed that "it is not a decision against the kingdom or its people."

He defended his decision until late, saying that "blaming companies for keeping the lines of communication open and for protecting people and jobs is simply reducing it too much."

The recently leaked surveillance images of Jamal Khashoggi's murder appear to show a man walking around with the writer's clothes in Istanbul after his murder.

CNN aired the video on Monday, citing a Turkish official who described the man as a "double body" and a member of a 15-man Saudi team sent to Istanbul to attack the writer.

CNN says the man left the consulate for his back exit with an accomplice, then took a taxi to Istanbul's famous Sultan Ahmed Mosque, where he went into a public restroom, changed his clothes again and left.

State broadcaster TRT also reported that a man who entered the consulate building was seen leaving the building with Khashoggi's clothes.

The French presidency says that French President Emmanuel Macron and President Donald Trump shared their concerns about the circumstances that led to the death of Saudi journalist Jamal Khashoggi.

The statement, describing the journalist's death as "tragic," says the two presidents had a phone call on Sunday, without giving further details.

Saudi authorities acknowledged on Saturday that Khashoggi was killed on October 2 at the consulate in still disputed circumstances.

Turkish President Recep Tayyip Erdogan said the details of Khashoggi's assassination will be revealed in a speech Erdogan will give in parliament on Tuesday.

The Indonesian president is "deeply concerned" about the murder of journalist Jamal Khashoggi at the Saudi Arabian Consulate in Istanbul and wants a transparent investigation.

President Joko Widodo met on Monday with Saudi Arabia's foreign minister Adel al-Jubeir at the presidential palace in the city of Bogor, west of Java. Widodo's concerns were conveyed by the Indonesian Foreign Minister after the meeting.

The minister, Retno Marsudi, told reporters that "the president is deeply concerned about the Khashoggi case and Indonesia expects the ongoing investigation to be transparent and meticulous."

Al-Jubeir makes a two-day visit to Indonesia and has a separate meeting with Retno on Tuesday. Retno said the visit was scheduled after the Saudi monarch visited Indonesia, the most populous Muslim-majority nation in the world, in March last year.

Turkish officials say the Turkish president and his US counterpart spoke on the phone and talked about the murder of Saudi journalist Jamal Khashoggi.

Officials say that Recep Tayyip Erdogan and Donald Trump agreed during his call late on Sunday that the journalist's case "should be revealed in all aspects."

Saudi officials said Khashoggi died in a fight with Saudi officials at the kingdom's consulate in Istanbul on October 2. Turkish officials and reports have suggested that a team of Saudi agents was sent to assassinate him.

Erdogan and Trump also addressed the issue of US pastor Andrew Brunson, who was released after about two years of detention in Turkey, cooperation in the fight against terrorism and the situation in Syria.

Turkish officials spoke on condition of anonymity in accordance with government regulations.

An official Turkish government newspaper reports that a member of the entourage of Crown Prince of Saudi Arabia Mohammed bin Salman made four calls to the royal office from the Saudi Arabian Consulate in Istanbul the day that Jamal Khashoggi was killed.

The Yeni Safak report on Monday did not cite any source for the information. However, pro-government newspapers have been leaking information about the killing of Khashoggi, apparently with the help of the Turkish security forces.

The newspaper says the calls went to the head of the Crown Prince's office, as well as to a number in the United States.

Saudi Arabia did not immediately respond to a request for comments on Monday. The kingdom acknowledged Khashoggi's death on Saturday, saying he was killed in a "fist fight." Meanwhile, Turkish media and Turkish officials say the 59-year-old Washington Post columnist was attacked by a 15-man Saudi team that cut off his fingers and decapitated him.

A senior German official is pushing for a joint EU position on Saudi Arabia after Berlin backed a freeze on arms exports to the kingdom following the assassination of writer Jamal Khashoggi.

The government of Chancellor Angela Merkel said that Riyadh's explanation of Khashoggi's death is insufficient. Economy Minister Peter Altmaier stressed on Monday his position that "at this point we will not approve more arms exports because we want to know what happened."

Altmaier told ZDF television that a joint EU position is needed "because only if all European countries agree, this will make an impression on the Riyadh government." He said that "it will not have positive consequences if we, as we are doing, do not currently pursue our arms exports if at the same time other countries fill this gap."

The crown prince of Saudi Arabia, Mohammed bin Salman, called the son of Jamal Khashoggi, the journalist killed at the Consulate of Saudi Arabia in Istanbul by officials who allegedly included a member of the royal entourage.

That's according to statements released early Monday by the state Saudi Press Agency. The statements say that both King Salman and Prince Mohammed "expressed their condolences"

Khashoggi was killed on October 2 at the consulate, where he had gone to find the paperwork to get married.

For weeks, Saudi Arabia insisted that the Washington Post collaborator had left the consulate. The kingdom finally acknowledged his death early Saturday in what he described as a "fist fight."

The Turkish media cite officials who say that a team of 15 Saudis withdrew Khashogli's fingers, killed him and dismembered him.