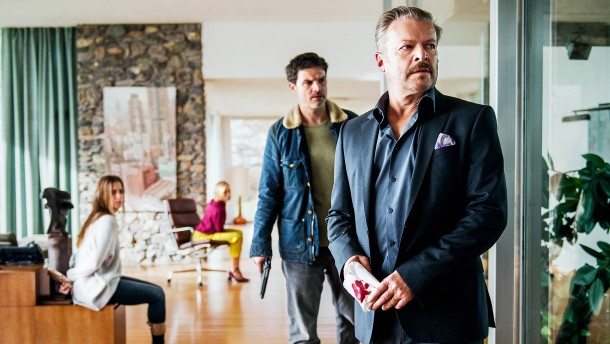 Jhe gets what he deserves. For example, Anton Seematter (Roland Koch), CEO of the Swisscoal Group, runs a rare Maserati model as a car, sits high above the Lucerne in the Mies van der Rohe glass on a spacious lake, gathers art and donates against a reputation as a cartridge significant sums of finance faculties.

The title pages of a number of management magazines decorate the wall of their bedroom, pictured at all: Anton Seematter in Erfolgspose, "Deal Maker" at the moment, year, century. Rich in exceptional dedication and rarely intellectual brilliance, it says in the brochures. In slender portraits of self-confidence about meritocracy, a rule of law based on performance. In meritocratic consistency, the unemployed man is blamed for his misery – he is not flexible, not smart, not forward-looking enough. Inequality belongs to the system. It can't just be rich. Or, as Seematter's daughter Leonie (Cecilia Steiner), an economics student, says: "Not everyone can be born with privileges, otherwise they would not be longer."

Not even the inflation compensation has been taken into account

Mike Liebknecht (Misel Maticevic), who moves across the German-Swiss border in the third-last Swiss "Tatort" from Lucerne to confront Seematter with the support of a Beretta, has got what he deserves from a performance dictatorial point of view. Operational termination by the parent company Swisscoal, which has acquired its metal processing plant in Bremerhaven to seal it and assign the orders to Asia. Failed in his marriage, loss of his son, anger in his stomach. Liebknecht – the name is not in vain, an overly clear reminder of the supervisor Karl Liebknecht – comes into the house to demand with force of arms what he is entitled to. Seematter is replacing loss of income before retirement. He unimpressed explains the fault. To understand the situation Liebknecht lacks "the overall view". To calculate basic economic understanding, he did not even take into account inflation compensation. Arrogance or sarcasm? Or it much talked about the loss of top executives?

In the game arrangement of the duel between Seematter and Liebknecht, one can identify "Friss or die" by Jan Cronauer (based on an idea of ​​Matthias Tuchmann, who died in 2016) as a new "crime scene" set of popular "capitalist bashing" in German-speaking TV, Either a banking or industrial environment – one usually meets conscientious figures who seem to be meaningless to the socialist revolutionaries of the last century because of their slenderness as a means of class struggle. But "Eat or Die" does more of it, at least a better movie than the script suggests. This center has a hostage case with multiple inversions of circumstances in which the police Reto Flückiger (Stefan Gubser) and Liz Ritschard (Delia Mayer) accidentally witnessed the system conflict.

Flückiger and Ritschard decide first in the death of an economics professor who was Leonie's lecturer. One suspicion points to Anton Seematter. However, this does not come to the question, because in the hostage house the hostage-taker "Deal-Maker", his wife Sofia (Katharina von Bock) and the daughter in chess. Three hostages are five, the violence escalates. The circumstances begin to dance, rather to stumble. Of course, everything is ultimately systematically related to everything.

Director Andreas Senn and especially cameraman Philipp Sichler ("Tatort – born in pain", "The White Rabbit") creates a close atmosphere of the threat, where the perpetrator and the sacrificial pattern are not clearly depicted. At the end, some misogyny seems to pass through. On the stage that decides on the Liebknecht's whereabouts, the danger zone kitsch is offered in front of gray seascape. The balance is therefore mixed. The Lucerne will continue to investigate twice until the end of 2019, when Zurich will take over the Swiss "crime scene". It is a pity for the quiet investigators Flückiger and Ritschard to avoid such cases.