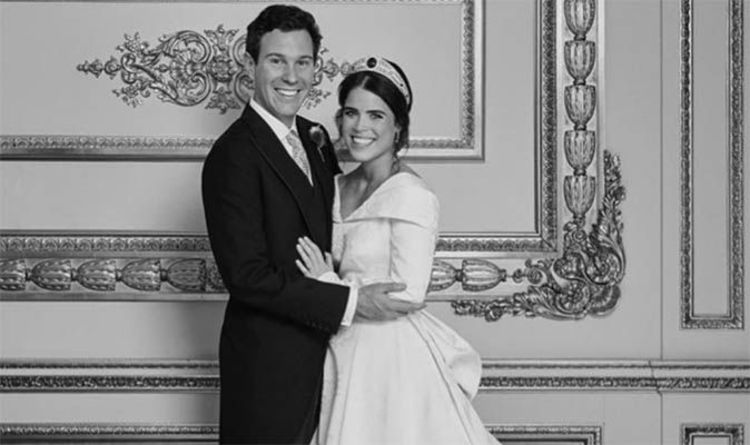 The black and white princess with class was published today on Instagram by the princess. The image shows the smiling couple of newlyweds, armed in what is believed to be the Drawing Room of Windsor Castle. Within the same walls, the real photographer Alex Bramall took the official snapshots of the day and showed the whole family gathered to celebrate the loving couple.

But this image, more intimate and relaxed than the others, came with a personal message from Eugenie.

Using the popular hashtag "tbt", shorthand for "ThrowBack Thursday", he wrote: "#tbt to THE great day of my life".

Social networks were taken by Storm by real fans, who soon commented on the photos and shared their love for Eugenie and Jack.

An Instagram user wrote, "So beautiful, I loved seeing every minute of your wonderful wedding."

READ MORE: the image of Prince Louis GIGGLING was NOT released for THIS reason

Another shouted saying, "Ooooh, you two were too cute."

The add-on, which received 44,900 "likes" and was commented by more than 730 people in less than five hours, was also called "impressive" and "elegant".

Eugenie and Jack were married on October 12 in St George's Chapel in Windsor, the same place chosen by Prince Harry and Meghan Markle earlier this year for their own fairy tale wedding.

More than 800 guests attended the royal residence grounds, and millions had the opportunity to follow the ceremony live on ITV and on the official YouTube channels of the Royal Family and Prince Andrew, Eugenie's father.

This is not the first time that members of the royal family decide to publish exclusive photographs that are intended only for them.

After the christening of Prince Louis, Prince William and his wife Kate, the Duchess of Cambridge, decided to throw a grace brooch that showed his youngest son laughing while he was embraced by his mother.

The photo, taken after the private ceremony of July 9, was published days after the official photos, and Kensington Palace said: "The Duke and the Duchess of Cambridge published an additional photograph taken after the baptism of Prince Louis.

"The duke and the duchess hope that everyone will enjoy this beautiful picture of Prince Louis as much as they do."