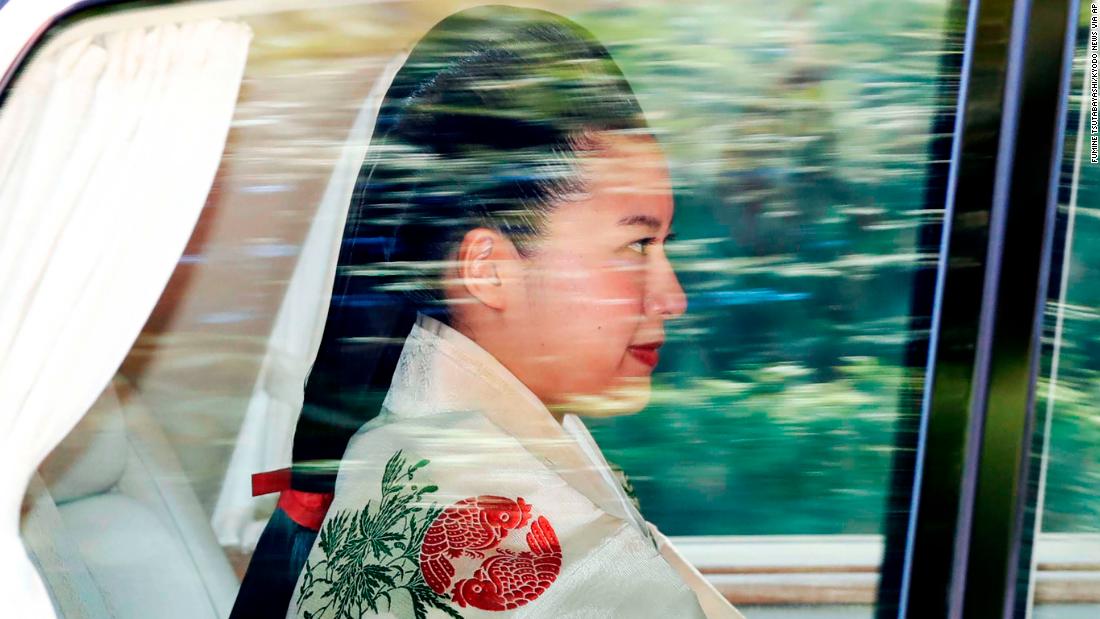 When the smiling couple entered the sanctuary, the crowd shouted their congratulations with the Japanese word "Banzai", which means an auspicious desire for long life. Family and close friends welcomed the bride and groom on their way to the ceremony hall.

Princess Ayako was dressed in a light yellow uchiki kimono embroidered with pink flowers and green leaves and a dark purple hakama: pants with wide pleats on the legs that fall down to the ankles. He also wore a fan made of Japanese cypress, called hiougi. Moriya wore a black Western-style coat, gray striped pants and a silk hat that belonged to the late father of Ayako, Prince Takamodo.

Ayako's kimono is similar in style and design to that worn by her sister Princess Noriko when she married Kunimaro Senge in 2014.

Princess Ayako, 28, is the youngest daughter of Princess Hisako and the late Prince Takamodo, cousin of Emperor Akihito. According to the imperial law of Japan, the female members of the royal family renounce their titles, status and subsidy if they decide to marry someone who has no real or aristocratic family ties. The same rule does not apply to male members of the royal family.

By marrying Moriya, an employee of the shipping company Nippon Yusen KK, 32, the princess will relinquish her royal status and will charge the Japanese government a lump sum of $ 950,000 for living expenses.

Before the ceremony began, Ayako turned her kimono into a more formal Shinto-style robe. He wore a red kouchiki, a "little cloak" with long, wide sleeves, and a long split brown skirt called naga-bakama.

The ceremony itself was a private affair, attended by only close relatives. Inside, the couple would have performed several rituals that marked a Shinto style wedding, including the exchange of bridal sake cups and the presentation of a sacred branch of Tamagushi as an offering. The newlyweds would also have exchanged marriage vows and rings.

After the final prayers, the couple emerged from the sanctuary as husband and wife. Moriya said he thought his new wife looked "beautiful" as they answered the reporters' questions. "I would like to support her firmly and, together, build a happy family with lots of laughs," she said.

"I'm shocked how blessed I am," Ayako said. From a very young age, Ayako said that he was taught that being born in the imperial family meant that his duty was to support the emperor and empress. "I will leave the imperial family today, but I will remain unchanged in my support for your majesty and majesty," he said.

The sanctuary where the ceremony took place is of great symbolic importance. Opened in 1920, the Meiji Shrine is dedicated to the deified souls of Ayako's great-grandfather, Emperor Meiji and his wife, Empress Shoken.

"I am very happy to have celebrated the wedding at this Meiji Shrine, where my great-grandfather, Emperor Meiji, is worshiped," Ayako said. "I feel very happy."

The marriage of Ayoko and the renunciation of real duties come at a difficult time for the oldest monarchy in the world. The much loved Emperor Akihitio announced that he will resign on April 30, 2019 and will pass the Chrysanthemum Throne to his son, Crown Prince Naruhito. The imperial law establishes that the throne must be passed on to the male heirs, and since Naruhito only has one son, Prince Hisahito, aged 12, may be solely responsible for continuing the royal line.
The abdication of Akihitio and the upcoming marriage of his granddaughter, Princess Mako, reignited the debate over the role of women in the monarchy of Japan and whether the imperial law should change to allow women to inherit the throne.

"It's a sensible and necessary option in terms of risk management, but the elite conservatives who rule have resisted strongly despite the strong public support for women's succession," said Jeff Kingston, Director of Asian Studies at Temple University in Japan and author of the next book. Japan.

Unlike the United Kingdom, where Queen Elizabeth approved changes to the royal line of succession and granted equal rights to the sons and daughters of British monarchs to inherit the throne, officials in Japan have ruled out a similar move.
An abdication law was passed allowing Akihitio to resign without a proposed resolution questioning whether women who marry outside the family have to rescind their real rights.

"Apparently, they do not get inspired by Queen Elizabeth … and instead they take refuge behind fatiguing patriarchal justifications for not doing it," Kingston said. "The law will change only if absolutely necessary."