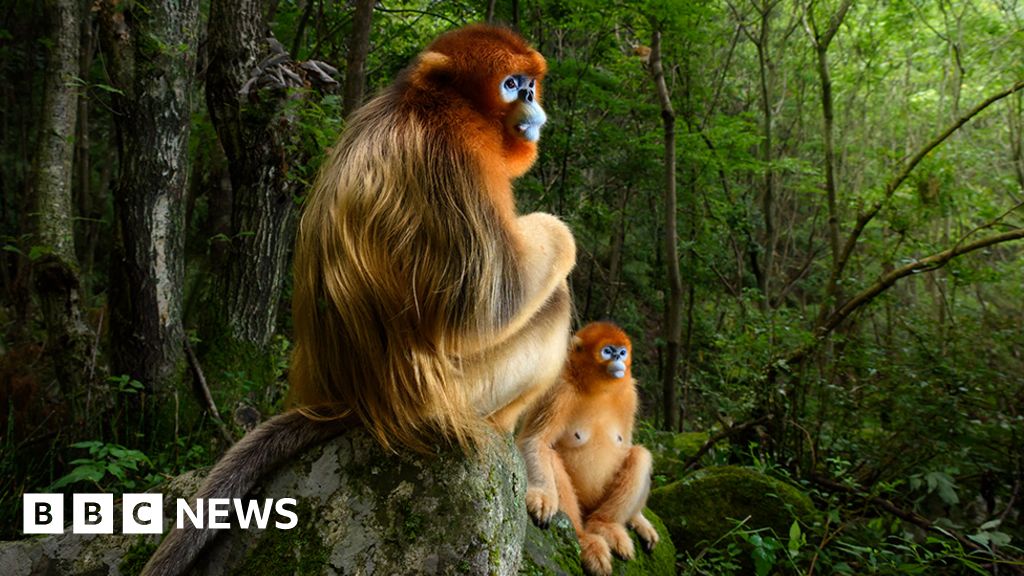 They represent two monkeys that rest on a stone and stare into the distance. What are you looking at and what are you thinking?

It turns out that they are seeing a great barney among the members of their troop.

This image of apparent serenity against commotion is the overall winner of the Wildlife Photographer competition of the year 2018, announced at a gala dinner at the Natural History Museum in London.

The photo was taken by Marsel van Oosten in the Qinling Mountains in China.

The Dutchman had to follow the troop for many days to understand the dynamics of the animals and predict their behavior. His goal was to show in a shot the beautiful hair on the back of a male monkey and the blue face of the creature.

Marsel's perseverance finally paid off with this exquisite composition that includes a smaller female behind.

The photographer told BBC News that he was "shocked and honored" to receive the award. "I am happy that I am with this particular image because it is an endangered species and that very few people know that it exists and it is important that we realize that there are many species on this planet that are under threat.

"It's not just about rhinos, tigers and polar bears, and this type of species deserves much more attention and all the protection they can get."

The image is not striking or shocking as sometimes WPY winners are. But there is something fascinating that appeals to you, says Roz Kidman Cox, the president of the competition judges.

"While we were reviewing the tickets, we kept coming back to this," he recalls. "It's almost like a stage, I think what it does is colors and lighting.

"These monkeys usually feed on the trees, but somehow Marsel managed to trap them in the ground, and he carefully throws a very soft flash to the scene to illuminate that incredible skin."

This year's junior winner is Skye Meaker from South Africa for her photo of a leopard in the Mashatu Game Reserve in Botswana.

The animal is well known and bears the name of Mathoja, which in the Bantu language means "he who walks with a limp". The leopard broke a juvenile leg.

He survives, but he has to fight hard because, unlike other big cats, he can not pull the prey to the trees to eat it, says Skye. That means eating on the ground where the hyenas are always trying to pinch a kill.

"We waited several hours to get this vaccine, I wanted Mathoja's eyes to be open, and just for a couple of minutes that was what happened." Mathoja looked directly at us.

He has a great future, believes Kidman Cox: "I've had enough leopards on a log, it's a cliché, but Skye has something different here, I think it has to do with light again, the speckled green at the bottom. there is the expression on the face of the leopard. "

Here are other winners of the section:

10 years and less in the category – This picture is taken by another young man, Arshdeep Singh. He won his section for this photo taken outside of Kapurthala, a city in the Indian state of Punjab. He says: "I saw the owls fly in the tube and I told my dad, he said that is not possible, but he stopped the car, we had to wait 20 or 30 minutes until they came out again, and then I took the picture. "

Category animals in their environment – Cristóbal Serrano of Spain took this photo of crabeater seals resting on an ice floe of the Antarctic Peninsula. Seals have a close relationship with sea ice because it is the habitat that provides shelter and food (algae) for krill, small crustaceans. And it is the krill that is the main source of food for the seals.

Behavior: invertebrate category – Georgina Steytler took this photo of the mud wasps in the Walyormouring Nature Reserve in Western Australia by lowering her level. In the mud. "I just got into a long lens, taking one shot after another, I wanted one of the wasps to carry a clay ball, and getting two was incredible, it's luck, but you have to be in the right place at the right time with the adequate equipment. " The wasps use the balls to build nested chambers where they lay eggs in the paralyzed bodies of spiders.

Underwater category – This is a flying fish caught in the lens of the American photographer Michael Patrick O & # 39; Neill. It was taken during a night dive in Palm Beach, Florida. These fish are very shy during the day but at night they are easier to approach. Michael tried several camera and light adjustments to get this other mundane impression of the animal.

Wildlife photojournalism category – This striking image of a street monkey was taken by Joan de la Malla on the island of Java, Indonesia. It is a macaque that has been forced to wear a clown mask. "It's painful and the macaque has his hand raised to try to remove it," says Joan. The Spanish photographer has been working with animal welfare groups to try to close this type of street performances. In the last weeks, this has happened; and this particular animal, known as Timbul, goes to nature.

Wildlife photographer in the category – Javier Aznar González de Rueda, another Spanish photographer, entered a series of images, with this one presenting the Alchisme Treehopper. The photograph, taken in the reserve of El Jardín de los Sueños in Ecuador, shows a mother taking care of her nymphs. A treehopper will lay its eggs on the bottom of a colored leaf at night and then cover them with a thin secretion. Once the eggs hatch, they develop through five nymphal stages, which differ in size, color and ornamentation.

Category Behavior, Amphibians and Reptiles. – A Hellbender salamander holds a northern water snake in its jaws in this picture taken on the Tellico River in Tennessee. David Herasimtschuk says that the snake finally managed to escape after fighting with the largest aquatic salamander in North America.

Category of Earth Environments. – The top of a high dune on the skeletal coast of the Namib desert, where mounds of sand sculpted by the wind merge with the waves of the Atlantic. Look more closely and you will see the fog that often forms in this region of Africa. As the fog moves inward, it provides moisture that keeps plants and insects alive.

WPY is one of the most prestigious competitions of its kind in world photography.

Started in 1964, the contest is now organized by the Natural History Museum of London.

An exhibition of the best images opens at the South Kensington institution on Friday. Next year's competition starts taking entries from Monday.