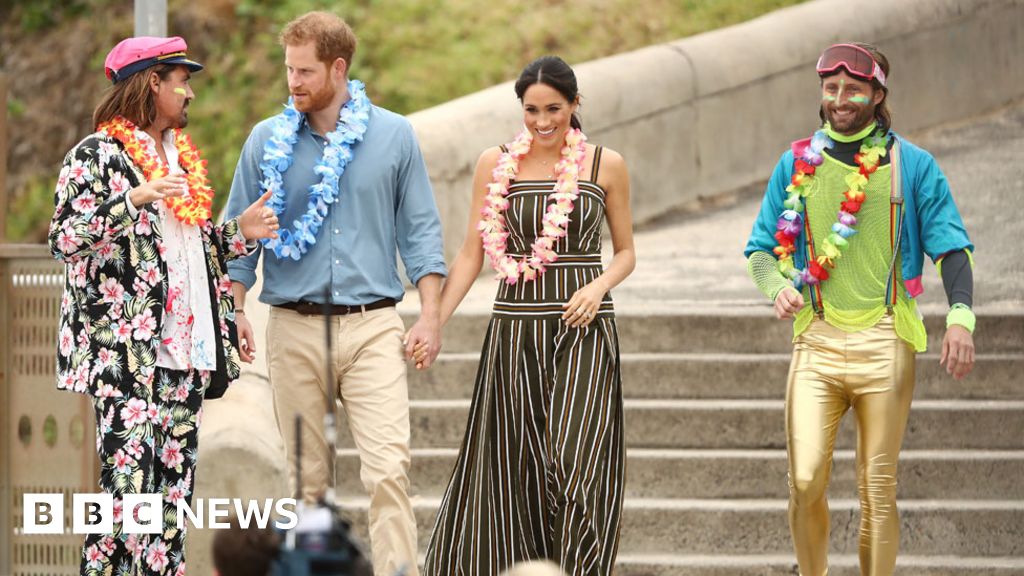 Prince Harry and Meghan took off their shoes and walked barefoot on Bondi Beach, while continuing their tour of Australia and New Zealand.

The Duke and the Duchess of Sussex met with the group from the surf community One Wave, when they participated in "Fluro Friday".

That meant there were a lot of colorful and neon garlands to be seen in the session, which encourages discussion on mental health issues.

Later, Harry climbed the Sydney Harbor Bridge with the competitors of Invictus Games.

The couple was greeted by cheers and shouts when they arrived in Bondi, the last stop on their tour of Australia, just before 8:30 local time on Friday morning.

They were received by Grant Trebilco and Sam Schumacher, founder and co-founder of OneWave, one in a floral outfit and the other in gold pants and rainbow-colored suspenders.

Harry got into the spirit of the occasion by sliding a blue lei around his neck, to match his shirt of the same color, while his wife was given a rose.

The duchess wears another outfit of an Australian designer, this time choosing a striped dress by Martin Grant.

Both walked barefoot to walk on the beach, where they sat in a circle in the sand to talk to the members of OneWave.

The Duke then went on to his challenge at the Sydney Harbor Bridge.

He and three Invictus Games athletes took 13 minutes to complete a milestone ascent. They joined in the escalation by Australian Prime Minister Scott Morrison.