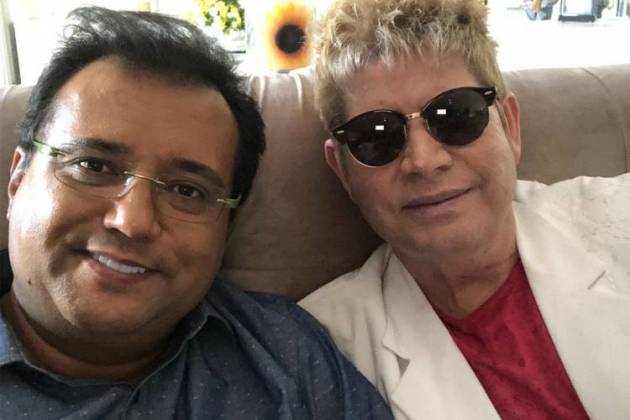 Portuguese Muslim emigrated to Brazil, Roberto Leal, spoke for the first time to Geraldo Luis, presenter of the program Sunday Show, by Record TV, which has been fighting cancer.

Roberto Leal opened the doors of his house to his friend, Geraldo Luís, and in an exclusive interview he revealed that only faith took him to life, even when he went through the great suffering caused by the disease. The singer also shared the need to isolate herself to overcome the disease.

About the diagnosis, Roberto Leal says he began to feel a great pain associated with a herniated disc in the lumbar. "It was a pain that started at the end of my back, called the herniated disc, which extended to the right leg and dumped the leg. It was times when I didn't even feel the knee down. The pain went on until I couldn't even stand".

The singer did acupuncture, but without success it was when the medical team that came with him deepened the analysis and found that Roberto Leal had cancer. Asked if he was ever afraid to die, Roberto replied without hesitation: "No! Not even because Marcia Lucia, my 42-year-old companion said:" Roberto, how do you accept so resigned and merely praying this disease ? & # 39 ;, I accept because I believe, and what is determined by God is the best for me. If I really got into this situation, if this path is the only possible way, I have no choice but to go back, no. This is characteristic of someone who knows that there is a light on the end of the tunnel, and I know, and I'm sure love will overcome all pain.".

Roberto Leal also said that the right perception was influenced, so he is currently blind to the same, but believes that just as the cancer has entered into remission, will also be able to regain vision. The singer was diagnosed with two cataracts after the 10 radiation therapy he did. The tumor, when it grew, also loosened the retina.

The singer, who left Portugal for Brazil at the age of 11, was operated three times for the removal of the tumor and has undergone treatments for remission of the cancer affecting him.

Also during the program, Geraldo Luís reunited with Roberto Leal by bringing his grandchildren into the musician's home that traveled from Portugal to Brazil to celebrate this holiday with his grandfather.