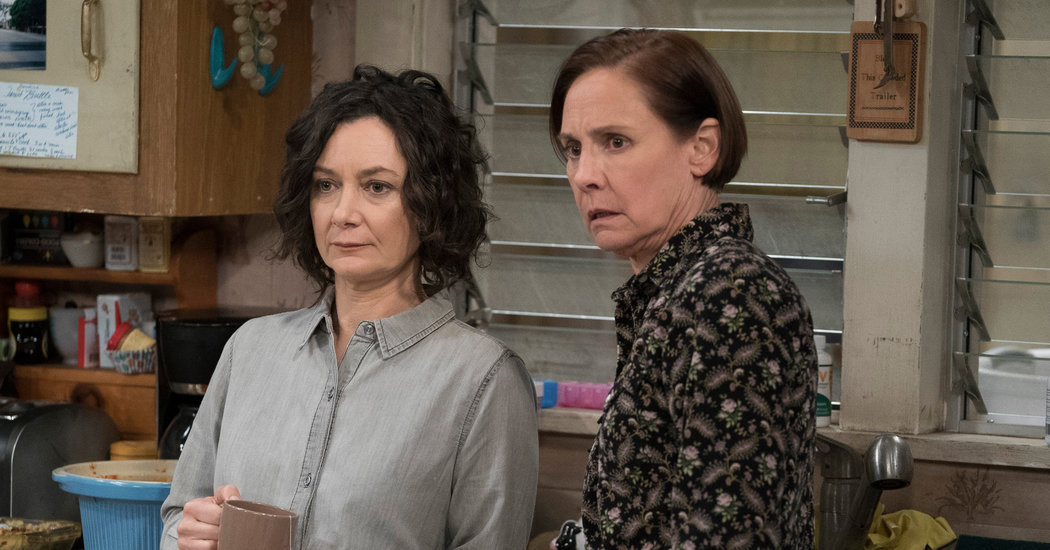 America has spent an angry year for "Roseanne."

Some people were angry that the resurgence has returned Roseanne Conner (Roseanne Barr), the feminist television spittoon, as a supporter of Donald Trump (who promoted the ratings of the program as a map of the Electoral College). Others got angry when ABC fired Barr, after he published a racist tweet in May and made plans to recover the cast without her.

"The Conners," the sans-Roseanne "Roseanne," returned Tuesday night to offer her audience not a fight, but a good cathartic scream. It was disturbing, crude and quite funny. But he also felt more like "Roseanne" than the resurgence of last spring.

Not much spoiler alert: Roseanne is dead. This was the only responsible option, not to symbolically punish the character, but to make it final and avoid an ugly, prolonged and inevitably politicized return campaign.

He also instantly gave "The Conners" a premise, a reason to exist beyond nostalgia. "The family moves after a death" is a premise of comedy of trust (that's how they all became Brady Bunch). But having the loss of someone that the public has known for so long as a family is a challenge and an opportunity.

The premiere, written by Bruce Helford, Bruce Rasmussen and Dave Caplan, opened three weeks after Roseanne's death, long enough to make it look like O.K. laugh – for the audience, that's it. As for the Conner family, as Becky (Lecy Goranson) pointed out, "Laughing inappropriately is what mom taught us to do."

While the premiere of "The Conners" was too bittersweet to be wildly fun, some of her biggest laughs came through Roseanne from beyond the grave. When Becky, for example, suggested postponing the accounts with the excuse that her mother had died, Darlene (Sara Gilbert) said it was too late: "Mom used it five times."

Much of the dramatic weight of the premiere fell on John Goodman and Laurie Metcalf, who are fortunately two of the best actors in primetime. Jackie (Metcalf) spent the episode cleaning the house, an act of manic and sublimated pain that felt symbolic even before she arrived at the iconic armchair.

The new widower Dan (Goodman), meanwhile, shuffled the episode as if he were dead. Dan is a contractor, he repairs things, and could not accept the idea that "fixing" Roseanne's knees was not enough to save her. He became very much like his old self when his grandson Mark (Ames McNamara) brought him a problem to solve, deciding which child he would sit next to on a study trip, working sweetly on an emerging story in the new family dynamic.

The great revelation of the premiere was that Roseanne died of an overdose of opioids, having developed an addiction in the spring season. Barr, who He ruined the turn in a podcast last month, calling it an "insult". But in any case, the decision was a compliment to the legacy of its creation, a show that at its best was about facing real problems: death, domestic abuse, unemployment – With hard love and acid humor.

Besides, we already knew what really killed Roseanne Conner: the racism of Roseanne Barr. The meta-cause of the absence of the character could not avoid stopping at the premiere of "Conners". And in a way, Roseanne's expulsion was a kind of rebuttal to the premise of the earlier "Roseanne" rebirth.

The resurgence made it partly affirmed that families could have deep and hurtful divisions over the elections and the state of the United States, but that, in the end, these were only policies. (This has also been a topic of the most conciliatory new episodes of "Last Man Standing" on Fox.)

It was nice to hear that, but it was not totally honest. He took the example of real life Barr to point out that the schisms in the United States at this time are not just politics, in the sense of marginal tax rates or health care policies. They are also ready Decency and empathy and dehumanization. (Barr compared a former African-American assistant to Obama with an ape). These are moral lines that, once someone like Barr crosses them, you can not just agree to disagree. You have to make a choice.

ABC did, and in the process, freed the Conners to be themselves.

I'm still not sure if "The Conners" works like more than an epilogue, but it has room to grow. Gilbert is now essentially the protagonist (Darlene dropped into Roseanne's empty chair in the sequence of the kitchen table closing the show) and her dry humor and gen X could give "The Conners" a different voice from the cheerful Barr megaphone. There is still a lot to do with the underdeveloped family branch of D.J. (Michael Fishman), his wife soldier, Geena (Maya Lynne Robinson), and his daughter Mary (Jayden King).

But the show will have to overcome not only a death, but the ghost of the last season of "Roseanne", that the political moment turned, like so many other things, into the less subtle version of itself.

"Roseanne" was once more nuanced than the partisan proxy that the Trumpenkulturkampf did. He recognized that people are complex and defective. And so, in the end, they made the first "Conners".

Still stunned by the death of his wife, Dan thought he had found someone to blame on Marcy Bellinger (Mary Steenburgen), whose name was on the painkillers he found in the house. It turned out that Roseanne had ordered the pills from Marcy (and others) and they had accepted it, as part of a network of neighbors who exchange the drugs they have difficulty paying.

What killed Roseanne, in a way, was what had often held the Conners: the willingness of people to put aside judgment and help. "Who am I supposed to be angry with now?" Dan asks Darlene.

"I thought Marcy Bellinger was a good choice," says Darlene, "until she ruined it for being all sad and human and all that."

The return of "The Conners", by the way, was heavy and disturbing. He was also sad and human and those things, and also fun. The question is whether there is room for it in a country of people who still want someone to get angry.