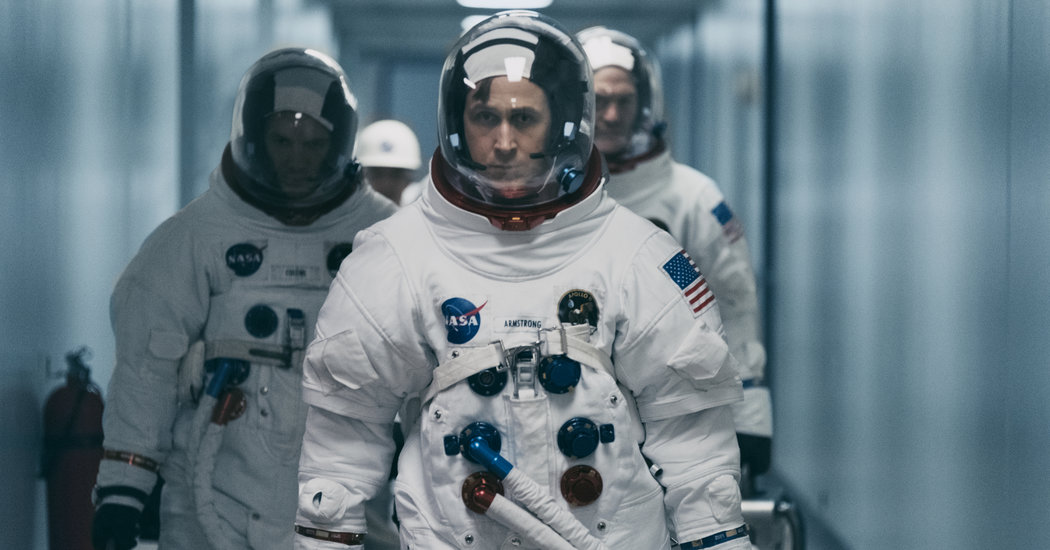 In July of 1969, when the attention of the world was fixed on the spectacle of the first lunar landing, the news transmissions were sometimes reflected in a speech given by President John F. Kennedy at the beginning of the decade. Indeed, when writing the check that Neil Armstrong, Buzz Aldrin and Michael Collins would charge half a dozen years after his death, Kennedy promised to send astronauts to the moon "not because it is easy, but because it is difficult".

A clip of that speech appears near the end of Damien Chazelle's "The First Movie," Damien Chazelle's shocking new film, which takes conquest of the difficulty as a theme and inspiration. Retelling the history of the American space program from the early 1960s to the Apollo 11 mission through the lens of Armstrong's professional and personal life, Chazelle (based on the biography of James R. Hansen) chronicles of setbacks, obstacles and tragedies along the way. to the final triumph.

It can be difficult, almost 50 years later, to appreciate how many times, and in how many ways, the landing on the moon almost did not happen. Not only that: we could think that we have seen everything before. "First Man", its end spoiled in advance, tries to restore a sense of uncertainty, of contingency, of the vast unknown faced by Armstrong and his colleagues. It also tries to find a new set of images (in IMAX, no less) to convey the strangeness and sublimity of those moments in the Base of Tranquility right after the "giant jump", so that we can intuit at least a glimpse of the fear that Armstrong must have felt.

All this is a daunting challenge, of course, as dangerous or expensive as Apolo himself, of course, but in the way a mirror of that company. Chazelle is an ambitious filmmaker who makes films about ambition. Its recent characteristics constitute a kind of trilogy on the subject, each larger in scale and wider in scope than the previous one.

"Lash," "La La Land" and now "First Man" refer to the hunger for greatness of a young or young man, and suggest a sequence of development, both for the archetypal character and for the director. The new drummer played by Miles Teller in "Whiplash" (2014), defined by his aggressive competitiveness and his struggle with a demanding mentor, gives way, two years later, to the pianist (Ryan Gosling) in "La La Land" who sails his own career in the context of a romantic association and professional rivalry with an equally driven artist (Emma Stone). Armstrong, a husband and father integrated into an organization that rewards both individual initiative and regimental discipline, completes the sequence.

"First Man", with Gosling as Armstrong (and a script by Josh Singer, who wrote "Spotlight" and "The Post"), is also a career portrait, as well as an act of bravery in the professional career. I do not mean that scornfully. Chazelle, who is already the youngest winner of an Oscar to direct, has always been in the mainstream of Hollywood. Like "La La Land," which set out to revitalize the seemingly antiquated genre of the musical, "First Man" is both knowingly and astutely updated.

His nostalgia is palpable – for a suburban middle class social order composed of fathers cut by the crew, mothers who stay at home, trucks and cigarettes, and also by idealistic programs, financed with funds from the federal government. And yet, Chazelle's interest in Armstrong is as personal as it is historical: bureaucratic obstacles, political battles and engineering puzzles provide the narrative machinery, but feelings are the fuel of the film. Armstrong's progress from pilot to celestial pioneer draws an epic arc, and like some of the ancient epics, "First Man" is primarily a study of characters, a space odyssey with a shy and enigmatic Ulysses at its center.

Her Penelope, loyal, anxious, angry, exhausted, is Janet (Claire Foy, who exchanges her plumiferous royal diction for the flattened vowels of the Midwest). She moves to Houston with her husband and his two small children after Neil is accepted into the Gemini program. (The people of NASA in the movie pronounce it Gemin-ee, not Gemin-eye). Previously, when he was at Edwards Air Force Base in California, the couple's young daughter, Karen, died of a brain tumor and "First Man" poses the pain of Neil and Janet as a kind of rosebud, a emotional and psychological center of gravity half buried, a source of motivation and meaning.

Karen's is not the only death to mourn. Janet sometimes seems to move through her days in anticipation of widowhood, and the progress of the Gemini and Apollo programs is measured in part in the lives lost. Even for viewers versed in the history of NASA, who will know the fate of certain characters as soon as they appear, the deaths will be a surprise. They are dramatized with cinematic tact, so that what you record is not horror but a sudden and disorienting absence, as if men had disappeared into space instead of crashing into the earth or burning themselves on the launch pad.

Neil, despite all his competitive momentum, is very much a team player, and taking the moon is a collective effort. "First Man" is more of a sports movie than science fiction, and not just because one of the mission's commanders (Deke Slayton) is played by Kyle Chandler, the always trainer Taylor for "Friday Night Lights" fans. Slayton and Robert Gilruth (Ciaran Hinds) oversee a squad of rivals and comrades, exhibition ships and role players, all of them competing with an invisible and formidable opposing team.

The Russians! The Soviet Union had defeated the United States at all landmarks of space travel, and NASA's lunar program is like a trip in the fourth quarter to score the winning touchdown. The natural field marshal seems to be Ed White (Jason Clarke), Neil's best friend. The wild card is Buzz Aldrin (Corey Stoll), who shoots in his mouth and is more tolerated than wanted by his teammates. There is a scattering of big-eyed novices and wise veterans to complete the squad. (Shea Whigham, Christopher Abbott and Patrick Fugit stand out in an excellent cast). They all work hard, drink beer together after hours and live in a Valhalla of tough and tender male camaraderie.

Neil is a strange little man. The biggest challenge facing "First Man" is not to recreate the space flight and the concomitant technology, although the noise of the ascent and the disturbing silence of zero gravity are represented in an impressive way, but they illuminate the interior life of a man who often behaves as if they were not in possession of such a thing. It can be difficult to know if Neil has an extra-dry wit or if he is literal-minded. (When astronauts are asked at a press conference what they would like to take to the moon with them, their response is "more fuel"). No one can guess how deep your water runs, neither your colleagues nor Janet. not your boys

His temperament buttoned, however, makes him a perfect representative of the paradox of space travel, a tremendously poetic adventure undertaken by men whose survival depended on the prose of the memos and the music of calculation. Other films about the US space program have featured cowboys, morning idols and Boy Scouts – Chuck Yeager of Sam Shepard and John Glenn of Ed Harris on "The Right Stuff", Jim Lovell of Tom Hanks on "Apollo 13" – but this Neil Armstrong It is different archetype. It's an egghead, and maybe also some cold fish.

Gosling, minimizing with every fiber of his being, is fully committed to the heroism of this conception of the character, but Chazelle does not trust it completely. Or, rather, he lacks confidence that the audience will take pride in such a man, and therefore, he casts a layer of sentimentality that is effective without being totally convincing.

From time to time, complaints are heard about the purpose of all this: the Apollo program, that is, that swallowed public money at a time of social upheaval and military conflict. Chazelle inserts a performance of "Whitey on the Moon" by Gil Scott-Heron, a satirically bitter protest song that could have provided an alternative title for the film. This dissidence is eliminated by the sublimity of the achievement of the astronaut, since it is shared through television, by tens of millions of people around the world. For a while, at least, people stopped asking about the point of all this. It was self-evident.

"First Man" does not reach that kind of greatness, although not for lack of trying. It gets almost everything right, but it's also surprisingly disappointing. It reminds you of an extraordinary feat and familiarizes you with an interesting and enigmatic man. But there is a leap beyond technical achievements (towards meaning, history, metaphysics or the wildest areas of the imagination) that the film is too careful, too earthy, to try.