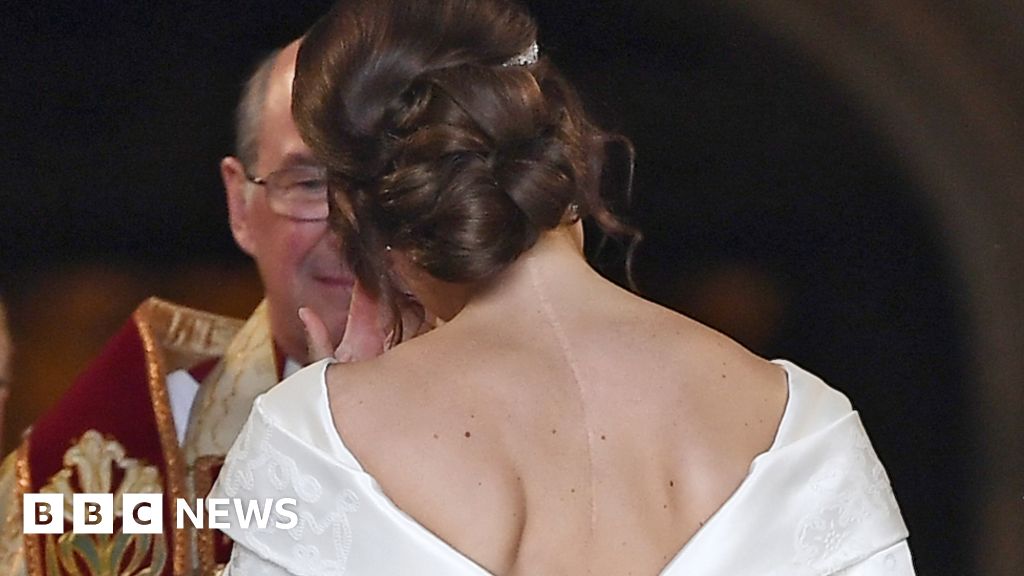 For her wedding, the princess Eugenia put on a dress that wore, instead of hiding, a scar from a child operation.

His statement that "you can change the way beauty is" has proven to be an inspiration to many. Readers told us that they are also proud of their scars:

Christine told us: "I am very happy that the word has spread and that there are people in those positions to be defenders of this."

Like the princess, she underwent major surgery on the back to treat scoliosis, a condition that causes the spine to bend to the side.

"Celebrities are showing the fact that they do not mind their scoliosis, it helps the younger people who might be fighting against it," says Christine, who declined to give her last name.

The queen's granddaughter, who underwent surgery to treat a curvature of the spine at the age of 12, said she wore this particular dress as a way to "defend young people who also go through this".

Christine also showed her scar at her recent wedding.

But she remembers how she felt when she was a teenager. When diagnosed with scoliosis at age 14, she underwent surgery five times between 15 and 17 years.

"It was pretty scary, since I did not even know what it was, or any other person who had the disease, I was going through puberty and a lot of changes."

"Your friends are going through the expected milestones and you have to catch up later, it felt like the end of the world … but it worked perfectly well."

Christine missed year 11 in school and had to retake some GCSE in college. But she was grateful for the support of her friends.

"At one point I was wearing a full-body cast, from chin to hip, all the friends from the school came to sign it."

She still suffers from back pain, but says that yoga and pilates help.

For Simon Howson-Baggott, 35, his scars are a reminder of a turning point in his life.

She does not look back on school days with affection, as she was given a plastic clamp to wear after she was diagnosed with kyphosis when she was 12 years old.

"It was a big, ugly plastic thing around the body," he says. "I came up with all kinds of excuses to try not to use it."

Where scoliosis causes the spine to bend to the side, Simon describes kyphosis as a "traditional hunchback."

He had to wait until he stopped growing, at 18, to undergo surgery. But two weeks in the hospital and six months of recovery interrupted his education and left the university without A-Levels.

Now he has a good job taking care of the corporate clients of a social media company, but he says: "It has been a real struggle".

The surgery left Simon, of Fareham, Hampshire, with a scar of 38 cm in the back and another of 15 cm along the hip.

"It was horrible at first, but it was not so painful after about three weeks, then you feel bright."

"I love scars, I used to tell girls it was a shark bite."

It even has a price to get a giant tattoo with a zipper: £ 550 "because it's so big". But if it's painful in the wallet, at least her dead nerve endings mean she will not suffer under the needle, she jokes.

"I've seen some really cool ones on the internet," he says. "But it's different for the guys.

"It was really great that Eugenie highlighted yours … For little kids like me, you need something to say that it's not a big problem."

"Maybe an advice like that would have helped me."

Journalism student Lauren Davidson used to be angry about her scar.

At the age of 18, after feeling a "deep pain" in the stomach and researching his symptoms, he worried about having an ovarian cyst.

However, a doctor told him that he was fine.

After six months of discomfort, he suffered a five-day attack of what he thought was food poisoning.

"My whole body hurt, it was horrible," he says. Her doctor did a blood test and, after discovering that she was anemic, put her in an ambulance.

"They had to cut me and see what happened," says Lauren, 24, of Grimsby. "I had two blood transfusions."

Finally, they confirmed the presence of a cyst.

"If the cyst had been found before, I could have had a key hole surgery, it took me a while to get used to this scar."

Since then, the scar has become part of his identity.

"Now, I feel empowered by my scar," she says. "I do not cover it, it shows that I have overcome something.

"I'd rather walk with a 6-inch scar than not be here." It seemed great to see Eugenie walking with her scar.

Mel Pollard, 35, was filled with tears when she saw Princess Eugenie proudly show her scar on her back.

Mel's daughter, Connie, was left with a scar on her lower back after undergoing surgery to treat a spinal cord defect when she was only 14 months old.

The operation should prevent your daughter from having trouble walking, bladder or bowel. And while Connie, who is now five years old, has no problems with the scar, Mel still cares.

"When you're older, you can feel aware of it," he says.

So Mel, from Warrington, was delighted when she saw Princess Eugenia.

"I had a tearful moment," she says.

"When I came back from school, I showed my daughter that a real-life princess also had a scar, and she thought it was brilliant."

"When I grow up, I can refer to this and remind you that you can use your scar as a badge of honor, that there's nothing to be ashamed of, it's not a bad thing."

Scoliosis is a condition that causes the spine to bend to one side, making the back appear rounded and the shoulder blades protrude.

Most often it starts in children 10 to 15 years old, but often there is no known cause. It is sometimes caused by bones that do not form properly in the uterus or other medical conditions, including cerebral palsy.

Three to four children in 1,000 need treatment from a specialist.

The UK Scoliosis Association says that approximately five out of six people with adolescent idiopathic scoliosis are women, but it is not known why.