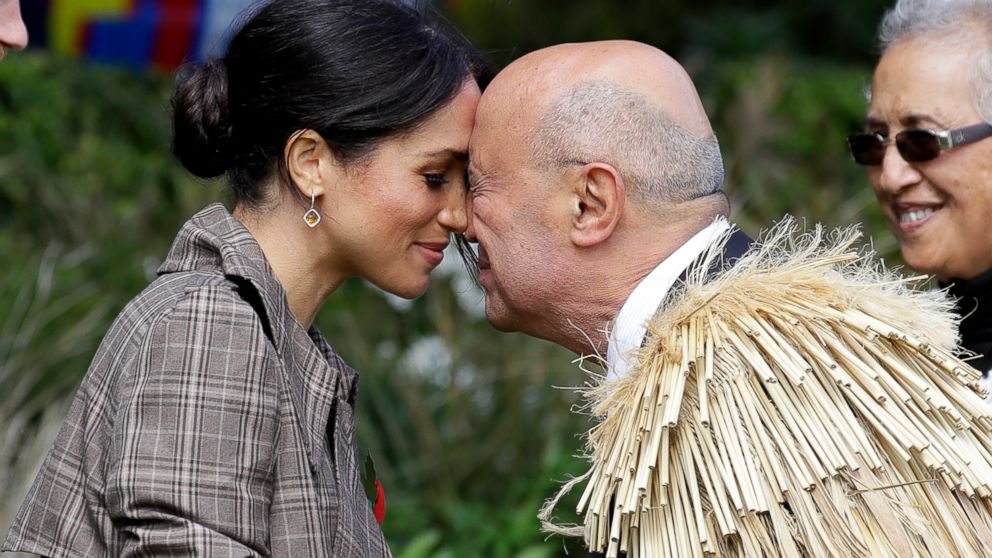 During the last day of Prince Harry and Meghan Markle's Down Under Royal tour, the couple spent time in Rotorua, New Zealand, where they learned more about the Maori culture and participated in a powhiri in their honor.

At Te Papaiouru Marae in Rotorua, the Korowai (feather watches) are placed on the shoulders of the Duke and Duchess of Sussex in preparation for the Powhiri, the welcome ceremony. #RoyalVisitNZ pic.twitter.com/BuXWLgT022

Meghan wore a dress by Stella McCartney, but then a traditional Maori korowai, or a cape, was added on top of the dress when she attended the powhiri.

Harry received a carved weapon and an ax while visiting the Tamatekapua meeting house where the event took place. Trevor Maxwell, a local district councilor, said he should not bring the ceremonial weapon to the next game between the New Zealand and England rugby teams on November 11.

During his speech, Harry said it was an "honor" to "spend time by the lake with the people of Te Arawa and Ngati Whakaue."

"One of the joys of our visit to New Zealand has been the opportunity to meet so many young New Zealanders who are devoting their talent and energy to making a difference," said Harry.

"Here are young Te Arawa Rangatahi creative, gifted and loving, who are using their talents to preserve and promote the Maori language, to support mental wellbeing and to achieve achievements in areas that will benefit their communities and their country," he added.

The royal couple will then head to Rainbow Springs Park, also in Rotorua, to learn more about the center's kiwi breeding program.

The kiwi is the national bird of the island nation of the South Pacific, but is increasingly in danger of extinction. Harry and Meghan will meet with those who work to protect the special species, and they will also be given the opportunity to name two kiwi chicks.

From there, the couple will meet with members of the public in the city and then visit the Redwoods Treewalk Rotorua, where they will see some Redwood trees that are over 100 years old.

Tomorrow, the royal couple will finally return to London, concluding their 16-day tour by four nations, Down Under.