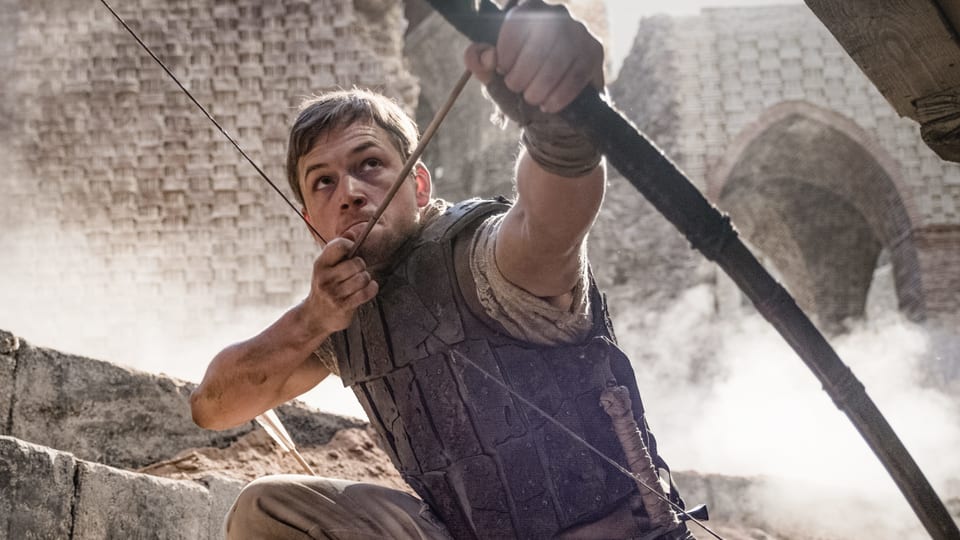 This recovery would actually be unnecessary: ​​it disappointed with inaccurate entry and meaningless action.

Director Otto Bathurst wanted to use his Effectorgie to create a modern Robin Hood for a young audience. His Robin is a blessed gentleman when he is called to military service by the Sheriff of Nottingham.

On the crusades he meets the dark-skinned John. The Arabic is impressed by the Englishman's good heart. He follows Robin back to his homeland and teaches him from then on.

The main characters meet after the battle outside the city. A competitor is missing why Robin is losing back to the match.

"Either anyone can do it or not," he says pathetically. Only when he is back on the battlefield, he realizes that the common infantry is still fighting there.

They risk the life of the revolution he has encountered. At least, he sets himself to prevent further bloodshed.

Much better known than leading actor Taron Egerton is Jamie Foxx, who trains in the movie Robin Hood.

The Oscar and Golden Globe winner knows the world of box-office hits such as "Django Unchained", "Collateral" and "Ray". His performance in the latter was honored with a grand 22 awards.

Commenting on "Robin Hood", the beloved 51-year-old said in an interview: "History tells of abuse of power and hope of change that Robin Hood represents. On the one hand, people who act of greed. it doesn't sound like an old myth. "

Facts that you should know

Since the 13th century, there is the legend of Robin Hood, who allegedly lived once in the forest north of Nottingham.

His name first became synonymous with offenders of all kinds. Later, various stories began to circulate as embossed Robin Hood as follows: As a famous killer, disinherited nobles, robber chiefs, knights or patriots. He is now completely the poor.

So today's legend has evolved gradually. Although largely fictitious, Robin Hood acts as an advertising medium for many Nottingham companies. Tourism also benefits from the popular legend.

When it comes to action and special effects, the film goes beyond the mark. They do not make the story dynamic, but confused. Costumes should be historic, modern and futuristic at the same time – but they look jumble together.

Robin doesn't just break legally many laws. Even the laws of nature do not seem to apply to him and his colleagues. For example, the soldiers move a flame wall with their shields aside.

Of course, a mythical story like Robin Hood doesn't need to be historically accurate. But she must not be bored. Unfortunately, the film does so by promising a sequel – like almost all action films in the meantime. With this bulky announcement, the remake spans the bow in the end.