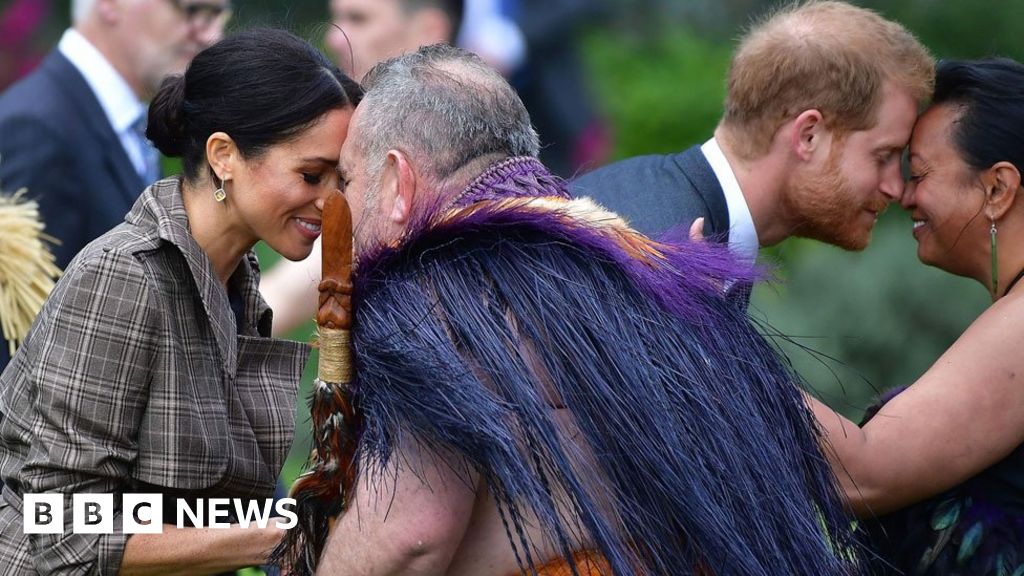 The Duke and the Duchess of Sussex have been received in New Zealand with a traditional Maori greeting.

They made a hongi, where they rubbed their noses with the Maori elders, when they arrived in the country, the last stop of their 16-day tour.

Harry and Meghan were greeted with a powhiri, a ceremony that includes singing and dancing, in Wellington.

The event, at the Government House, also saw members of the New Zealand Defense Force perform a haka for the couple.

They were met at the airport by Prime Minister Jacinda Arden, who traveled from Australia with the Kiwi Invictus team.

The couple then headed to the residence of New Zealand Governor General Patsy Reddy for the reception.

The 2018 Invictus Games came to an end in Sydney the day before with a closing ceremony, where Meghan and Harry delivered speeches.

After the arrival ceremony, their first engagement was a visit to the Pukeahu National War Memorial Park, where they laid a wreath at the Tomb of the Unknown Warrior.

The park includes the UK War Memorial, designed to show the trunks of the Royal Oak and Pohutakawa trees that intertwine to form a single canopy.

Upon returning to the Government House, they met with Mrs. Arden and opposition leader Simon Bridges before an event to commemorate the 125th anniversary of women's suffrage in New Zealand.

The duchess wore a necklace with a traditional Maori design.

In a speech on the right to vote, Meghan said that the women who fought for the movement were "universally admired."

New Zealand was the first country in the world to vote for women.

He added: "In waiting for this special occasion, I reflected on the importance of this achievement, but also on the greater impact of what this symbolizes.

"Because yes, women's suffrage is about feminism, but feminism is about justice."

Visits to Auckland and Rotorua will also be part of the New Zealand part of their tour, before leaving on Thursday to return to the UK.

Your marathon trip has also seen them visit Fiji and Tonga.