The Duchess of Cambridge has brought a piece of jewelry associated with Diana, the Princess of Wales, to a state banquet in honor of the Dutch king.

The tiara of Lover & # 39; s Knot was the star accessory of Kate during the tie event organized by the Queen in honor of King Willem-Alexander and his wife, Queen Máxima.

Diana joined the tiara in a white sequined dress and a turtleneck jacket by Catherine Walker, dubbed the "Elvis" look.

He also used it in 1982 at a state banquet for Queen Beatrix of the Netherlands, which took place at Hampton Court Palace.

Kate wore the gleaming diamond and pearl tiara at the state dinner at Buckingham Palace on Tuesday evening in a dress by Alexander McQueen.

The piece was originally made for Queen Mary, the grandmother of the queen, in 1914 by the House of Garrand, with pearls and diamonds belonging to her family. 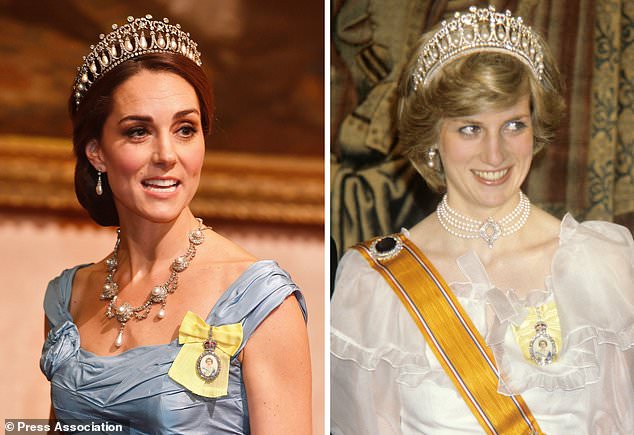 Its design was taken from a tiara owned by Mary's grandmother, the Princess Augusta of Hesse, known as the Tiara of the Knot of the Lovers of Cambridge.

Kate has worn the headdress several times, including at a diplomatic reception in 2016, and also at a state banquet for King Philip and Queen Letizia of Spain when they visited Britain last year.

We are sorry, we are not currently accepting comments on this article.