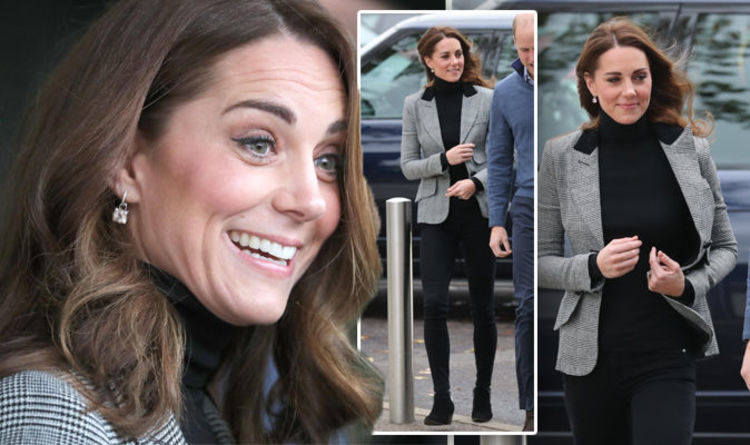 Kate Middleton, 36, was in Basildon, Essex today with her husband, Prince William, 36.

The Duke and the Duchess of Cambridge were in town to visit Coach Core, a program of apprentices that helps young people play sports.

For the special day, Kate braved the autumn cold in a suit reminiscent of Meghan Markle.

The elegant gray and white blazer showed a checkered print, with Kate dressing it casually.

It was cinched at the waist and had large details in the pocket, with a black border around the neck.

Underneath he wore a black polo jersey that warmed up, similar in style to those worn by Meghan Markle.

While wearing the elegant blazer, Kate wore a pair of tight black jeans, showing off her enviable figure.

On her feet, she changed her usual high heels for a pair of comfortable low-heeled black boots.

Adding a bit of glamor to her more subdued and casual look, Kate wore a huge pair of drop-down diamond earrings.

His hair was stylish in its inflatable, curly and dry signature.

William also appeared to be dressed, dressed in a blue zip sweater and casual blue pants.

The couple's visit had been organized to highlight the work done by Coach Core through sports.

The attire contrasted with the last time Kate was seen in public, which was during a state dinner at Buckingham Palace.

Earlier this month, the British royal family organized the state banquet at Buckingham Palace for King Willem-Alexander and the High Queen of the Netherlands.

The Duchess of Cambridge chose to wear the Cambridge Kovers Knot tiara, which was previously owned by Princess Diana.

It is not the first time he opts for the tiara in particular, since he often opts for the jeweled crown at diplomatic events.

Previously, he took it to a state banquet in 2017 to welcome a state visit to Spain, as well as to the annual winter party at Buckingham Palace the same year.