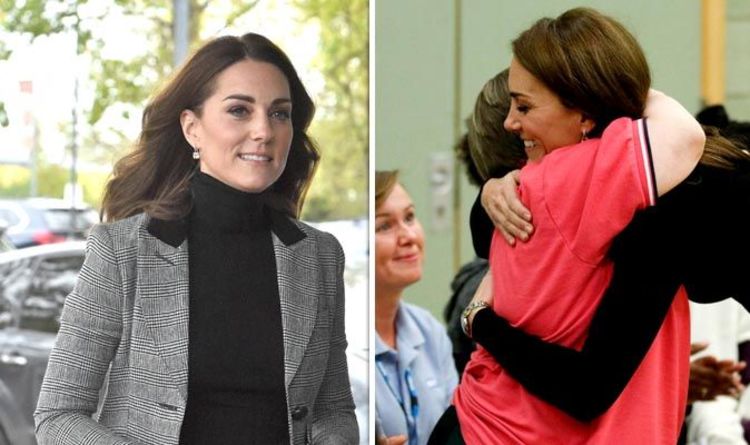 The Duke and Duchess of Cambridge seemed to be trying to snatch attention from Harry and Meghan when they visited a sports center in Basildon.

The Duchess Kate even followed the new royal couple breaking the royal protocol while hugging the children who had gathered to greet her.

She shared a delicious hug with a girl who was overwhelmed and excited to meet the royal couple.

Kate joined her husband, Prince William, in the visit to Coach Core Essex in Basildon, a branch of an organization that offers sports training internships that were previously visited by Prince Harry and Meghan Markle.

The couple played games with children, met new apprentices and listened to the graduates and learned how the scheme is helping the various local communities to participate in the sport.

The organization aims to train young people and help them develop professionally and personally through workshops and training.

They met with apprentices from Sport for Confidence and South Essex Gymnastics Club, which are partner organizations of the Coach Core Essex, which was founded three years ago.

The Duke and Duchess of Sussex attended the organization's awards ceremony in Loughborough last month, where she imagined Meghan embarrassing her husband by bashing him in basketball while wearing high heels.

Prince Harry said of his visit: "Coach Core offers a real opportunity for young people to move into a job or training and, in turn, will inspire thousands more to participate in the sport, which will expand the positive reach of the program "

The visit marks another step in the return of the Duchess of Cambridge to royal duties since the birth of Prince Louis in April.

The six-month-old boy was born three weeks before his uncle and Meghan were married in the Chapel of St. George at Windsor Castle.

Since the birth, the 36-year-old Duchess has retreated from her royal duties, but returned to work earlier this month when she visited a school and a wildlife garden in Paddington, in central London.

In today's event, Kate channeled the inspiration of her new sister-in-law, wearing a blazer and tight jeans that reminded me of Meghan's wardrobe.

The Duke and the Duchess of Sussex are coming to the end of their first real tour together as a married couple on their visit to New Zealand.

After enjoying a game of yesteryear, they are scheduled to attend a reception at the Auckland War Museum, organized by the country's Prime Minister, Jacinda Ardern, who recently returned to work after giving birth in June.

Meghan and Harry are expected to participate in a walk later in the afternoon.