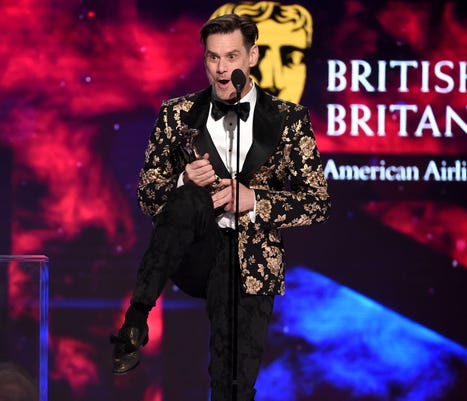 According to Jim Carrey, there is nothing funny about the current state of politics. But that does not stop him from reaching a timely joke that even he admits "it may be a bit early".

While accepting the Charlie Chaplin Britannia award for humor on Friday at the Beverly Hilton, Carrey joked: "I'm glad that (this trophy) did not arrive by mail." He added, maybe just half joking, "I do not have packages delivered to my house."

The honoree was referring to the 10 alleged explosive devices that were sent to leaders and supporters of the Democratic Party and recovered this week.

"It's my job to try (for a joke)," he said, defending himself, because Cate Blanchett, who also received the award, said there was no way to joke about suspicious packages.

.@Jim Carrey accepting @BAFTA#britannias 🏆 prize: "I'm glad it did not arrive by mail, maybe a little early (for that joke from the pipe bomb)" pic.twitter.com/75jUt4Gw1W

Carrey, a former critic of President Trump who recently shared his artwork depicting an explosive device in Trump's mouth, became serious, all without mentioning the name of the president.

In his speech, he spoke about the namesake of the award, the silent film star Chaplin, and compared the behavior of the legendary actor with what he feels is happening in the United States.

"Chaplin alchemized his pain, turned it into art … Exquisite, eternal, healing art," said Carrey. "He faced the American right wing of his time, his worst evils: hatred of immigrants, contempt for truth, greed and abuse of power, today we are fighting against those same evils … We have capitalism without conscience . "

So, Carrey highlighted those who are doing well today.

"I would like to dedicate this award to those who remind us of our virtues, who remind us of the truth." He recognized Charles Chaplin, Christopher Steel, Christine Blasey Ford, Colin Kaepernick and "one of my good friends and one of the best artists of our time, Robert De Niro, whose life was threatened this week, along with many other incredibly decent people who bring joy to the world. "

.@Jim Carrey receives much applause for dedicating his Charlie Chaplin award to Christine Blasey Ford, Colin Kaepernick and Robert De Niro, "one of my good friends and one of the best artists of our time, whose life was threatened this week" #brittanias@BAFTA@BAFTALApic.twitter.com/4zU9FiLoSY

To conclude, Carrey acknowledged that his speech was not exactly comical.

"I know this was not fun, but it's not very fun right now, and I want it to be fun, and I'll be fun again," he said. "We're going to regain our balance, okay?"

But before the night was over, Carrey could not help but be a little amused.

The comedian returned to the stage at the end of the show to pretend he was drunk, stumble, lean on host Jack Whitehall and pretend to drink from his prize.

A fake drunk @Jim Carrey pretend to drink from your #Brittania Award with the host @jackwhitehall#BAFTApic.twitter.com/3NkIQsOSRc