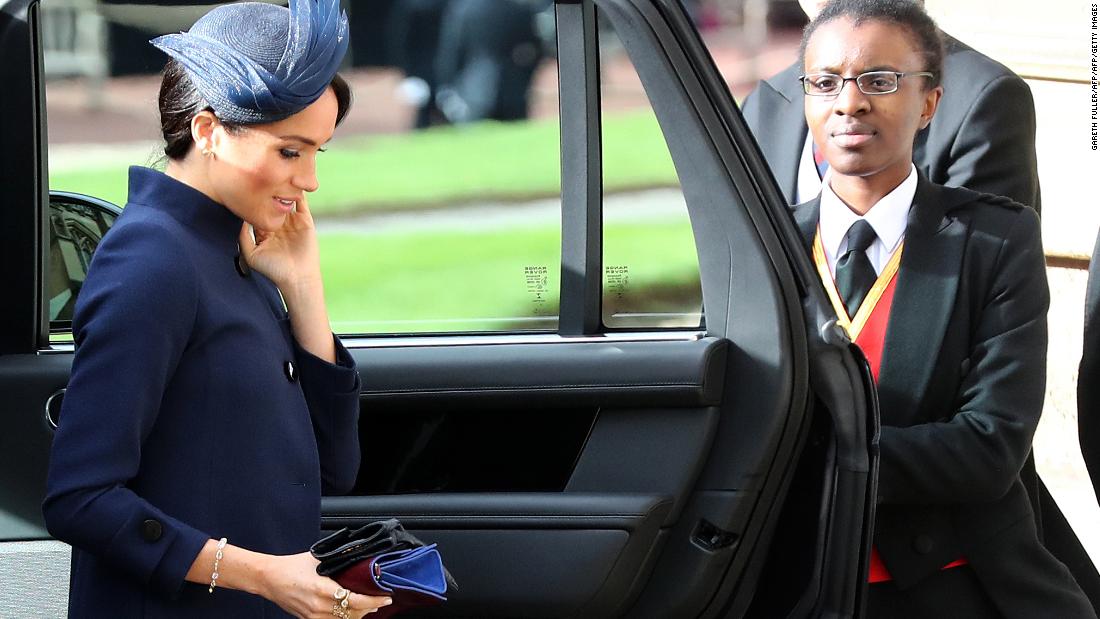 When it was announced last November that Prince Harry and Meghan Markle (now the Duke and Duchess of Sussex) were to marry, the former actress became one of the most watched dressers overnight. And it was not just the bride-to-be's dress that sparked interest. Since then, her every outfit has been cataloged by the press, scrutinized by the public and emulated by women with a lust for luxurious coats, shift dresses and sharp suiting.
And now that the couple has announced they're expecting a child next spring, we can expect that level of interest to reach new heights, as watchers ponder: How will trendsetting Meghan, the royal family's glamorous new addition, make maternity fashion her own?

Meghan and Harry on their wedding day in May. Credit: Aaron Chown / WPA Pool / Getty Images

The pregnant form in high fashion

The question comes at an interesting time, when fashion is seemingly embracing the pregnant form and expanding the definition of how the pregnant body can be presented. Last month, model Slick Woods appeared on the October 2018 cover of Elle UK in a windswept, stomach-revealing polka-dot top and black bike shorts, and was one of two models to walk Rihanna's Savage x Fenty lingerie show at New York Fashion Week .
And trendsetting women like Beyoncé, Amal Clooney, Kim Kardashian and, of course, Catherine, Duchess of Cambridge, have shown that they are not giving up their sense of style and embracing the bland, dependent embrace of the shapeless smock. (Incidentally, that was first popularized by a pregnant Lucille Ball, who became the first woman to show off her pregnancy on television in a controversial 1952 episode of "I Love Lucy.")

But while major designers, including Dolce & Gabbana, Jean Paul Gaultier and Chanel, have felt pregnant models down the runway in customized high-fashion ensembles (Comme des Garçons even gave models models faux baby bumps at their spring-summer 2019 show), off -the-rack maternity options remain limited, with no major brands producing maternity wear. "The case, arguably, is that most women wear maternity fashions for only a short period of time and are therefore reluctant to invest.

However, being both wealthy and a member of the royal family, Meghan – we can safely assume – will have no trouble finding options tailored to fit her personal aesthetic, like her famous sister-in-law, who was still stepping out in Alexander McQueen, Erdem and Jenny Packham during her pregnancies.

But to fashion and identity commentator Caryn Franklin, this reluctance on the part of major brands to dress the pregnant body presents Meghan with a chance to platform emerging talents who take that market seriously.

"This is a great opportunity for Megan to highlight an emerging independent business featuring maternity wear by showcasing bold and stylish designs during her working day in the later months of her pregnancy," Franklin said in an email. In doing so, Meghan could potentially spark new trends for pregnant women around the world.

It's not rare, after all, for a mother-to-be with enough shimmer to change the way pregnant women dress. In 1961, The New York Times wrote of how the "bright colors and elegant lines" worn by Jackie Kennedy during her pregnancy "did not go unnoticed by manufacturers or expectant mothers," and, in 1984, The Los Angeles Times reported that "the clothes industry was ecstatic about the prospect of a big boom in the sale of high fashion maternity clothes "when Princess Diana was pregnant with Prince Harry.

That effect does not seem to have waned in recent years, either: Last month, eBay revealed that Catherine's maternity style while pregnant with Prince Louis generated more searches on the site than any other royal this year. (Meghan came in second.)

With several months to go until her due date, we've probably got some time before. Meghan will have to swap her straight-sized outfits for something noticeably roomier.

"Given her penchant for chic clean lines and dark colors, she'll keep it chic and tailored, with pieces that will flatter and make a virtue of the bump," Helena Lee, features director at Harper's Bazaar, predicted in an email.

But however she chooses to dress, the world will be watching all the while, waiting to see the Meghan Look adapt and evolve.