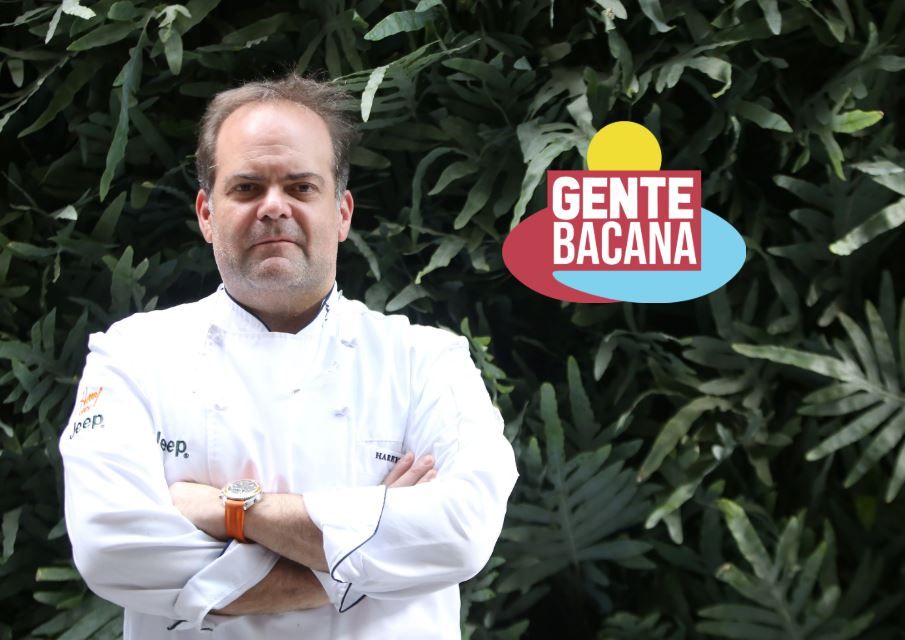 All sorts of moments appear around the food. Meetings between family or friends, farewell, celebrations, work or love affairs. but, have asked: Who is behind each of the ingredients that make up a menu?

Behind a record story is hidden, each food in itself illuminates the experiences of those who dedicated part of their life to the cultivation and the hands that prepared it, until they became part of a delicious food that could catch a palate.

For the final season of #GenteBacana We went to the kitchen of one of the most famous cooks in Colombia, Harry Sasson, to serve our readers, in letters, the menu of stories that hide the food produced in Colombia And you may be able to eat for breakfast, lunch or dinner.

We begin by remembering that a unique menu always starts from the set of endless elements involved with the techniques of the culinary experience. it The dishes we will analyze in this article started with the talent Harry Sasson and the fruit brought directly from the departments of Nariño, Valle, Chocó and Caquetá.

Manufacturers from different parts of the country brought their products to Harry Sasson's kitchen thanks to a Colombia and Coca Cola reconciliation project.

According to the famous chef, the main thread used to tie each dish was to seek the key secret of modern haute cuisine: prepare not just food but an experience. Tell a story in food.

"When you have a story to throw, things sell better.
We seek to buy directly from manufacturers. For example, fish from Guapi, crab from a town between Barranquilla and Cartagena, the man who managed to position his restaurant said the best in Colombia, according to 50 Best.

Counting stories in the kitchen gets stronger thanks to trends like "market kitchen" or "signature food", run by chefs such as Virgilio Martínez Véliz-Peruvian entrepreneur who works to show Peruvian food or Gastón Acurio, as to the rhythm of folk music, jazz, Italian songs and Peruvian music, he puts his tasting menu in a suitcase with old drawers to offer in tasting a tour through the history of Italian migration to Peru.

We made a ceviche, a smoked meat like ribs and we worked with the fish, it was not difficult

So, this time was the starting point of Harry Sasson's kitchen 100% Colombian fruits, which tells us to restore our roots in the kitchen and are grown by surviving women in the armed conflict They were part of the Mujer Reconciliación initiative, led by Coca-Cola and Reconciliación Colombia in June 2017.

Many of the foods you find on the market are not only valuable for the cultivation work of national territory, but for the strong social work involved in generating them, as the whole community spends time rebuilding its social fabric in rural areas, to reconcile with life and give room for entrepreneurship.

In this case, they were born between experimental meetings, where various conflicting people came together to create sowings together, training in the leadership of a whole population, technical guidance aimed at promoting sustainable fruit systems, training for income generation (aimed at mothers head of the family) and marketing strategies .

"They gave me the list of ingredients planted by the women who make up the program and as a cook I started to join and put together for each other. For example, you get the experience that with avocado, lemon and banana it is possible to make a chili. My goal in this menu was to take people to experience something inspired by the national fruits and the resistance of these populations, but not just sweet, highlight the versatility of the fruits, the chef says.

Then we'll tell you what was the result of this gastronomic, productive and social experiment:

1- Cocktail of shrimp in Amazonian pineapple, chili and coconut.

We started with a classic: shrimp cocktail with coconut and chili, however inspired by Amazonian pineapple brought directly from Florence, Caqueta, a product that was not industrialized and which is known to that community because it can have more flavors – that play between sweet and sour – according to the part it is cut off from.

Cocktail of shrimp in Amazonian pineapple, chili and coconut.

In every piece of this pineapple is the struggle for a whole society that wants to keep this fruit alive in Colombia's mind. They believe that it has hardly been made visible in regional, local, national and international markets. The fate of oblivion is similar to other products such as the palm heart of chontaduro, copuazú and arazá.

"Behind every pineapple there is a story about women who have been hit by conflict, sexual violence or forced disappearance, because their husbands or relatives have been killed, there is a history of internal conflict, but also of women who have decided to believe that yes you can do something to present measures for what has lived in the country, says Blanca Cunacue, the Masa Wai project spokesman.

The moment someone decides to buy national pineapple, helping to promote a whole society

To grow pineapple these women They have to wake up early in the morning to do their jobs, research lunch and have breakfast for their families early enough to have time to go to the crops.

They say that with their fruits they will send a message of unity: "We must work articulately and support us to promote societies, realize that a small action can turn into something very big, chicken, that's what happens to those projects , the moment someone decides to buy national pineapple, helps promote a community, Cunacue says.

The starting point: Traditional cuisine expressed in the legendary dog ​​ear erpa, also known as & # 39; Orejeperro & # 39;. Next to it is a magret de pato, which in simpler terms refers to a steak of lean meat and creamy chili. All this as an excuse to raise the value of a fruit as its own as bananito, in this case grown by the Association of Peasants in the Anchicayá River.

This is the main product of this community that dreams of taking it to wines, sweets and jams. It is obviously natural, in fact, fertilizers and fertilizers are taken from the same bananito, mainly from scion.

How few know it is It requires a lot of dedication, production means that more people come from high hours in the morning working to turn it into something edible andThen they prepare everything for the organic after-harvest.

"They go through the working hands of women who have lived the armed conflict closely because of the loss of husbands, fathers or children. They use this product to defend their finances and to support their large families", explains the leader Beatriz Camacho Mosquera.

-1 pork ribs in blackberries and honeycombs.

With this dish, we want to draw the attention of Ipiales, Nariños women, to tell you what lies behind the cultivation of arrears in the region of the Pumamake Association.

"Where we live, the climate is temperate and it makes it more sweet, hard and a taste that makes people fall in love. Our home is organic, has no chemicals," is the first thing that stands out for this fruit cultivator Jenny Malpud.

His work is not easy, There are 14 women who, although suffering the conflict, say they have decided to go beyond the tragedy to carry out Try to sell competitive products and continue.

"We woke up at 5:00, since we are the mother's head of the family, we send the children to study and then we use the crop." The Hay Day is early morning because the middleman picks up at 1:00 pm, and if we don't deliver it, they're lost, it's hard work that many diners ignore, "he recalls.

This food was made possible thanks to the production led by rural women who refuse to leave their territory and leave one of the most promising products in Chocó: the borojó, an unconventional fruit in haute cuisine.

This time, it was used by Harry Sasson with the famous technique of tasting Indian food known as chutney or chatni with a delicious fish.

Borojó in our country is known for its medical, exotic and diuretic use. They believe that it is a symbol of wealth, because it occurs in large quantities and provides much more than other fruit trees.

Inside the borojó is to enter into a tradition with the Pacific Ocean, where they attribute all sorts of uses: soft meat, smoke, decoration and sweet life with products such as jam or candies.

"The Pacific fruit gives you well-being, health, borojó, in particular can cure a wound that disinfects you, it removes the flu and has a unique taste. We want to reach all chains and colombians," says María España, representative of the Women's Association of Women in Quibdó municipality.

A good start required a delicious and creative end, and that was what Harry Sasson achieved by saving the loo from the Association of Sustainable Agricultural Producers – ASOPAS – in Tulúa and the sour guava from the Ministry's network of Chocoano Women in a single dessert.

Lulo of this dessert It was produced by women's victims of armed conflict in the same property, just 10 hectares. "Every day, they have to face water and the sun to improve their financial resources and strengthen themselves with productive and environmentally friendly ideas," says Jonathan Arena, Union Representative.

In the case of sur guava it was a production based on behavioral knowledge and good farming practices that are shared generation by generation in Chocó. "They are victims or displaced women, many have lost family members in the war, and after these fruits are valuable women who have given themselves psychosocially and have trained with their sons and daughters to demonstrate that a new story can be done and written from the countryside. for Choco, "Gemini Lucila Mosquera, head of the area witnesses.

From such different places, but with foods perfectly blended to achieve a harmonious preparation: candied lulos, that is, they were preserved in syrup, and sour guava became a refreshing ice cream.

Also on a menu with only four Colombian times from different parts of the country, Harry Sasson, Reconciliation Colombia and Coca Cola decided to send an inclusion message to remind him that each piece is a story of life to know, to hear, to consume and collaborate.

That just by buying Colombian fruits can a fate's destiny change in the eyes.