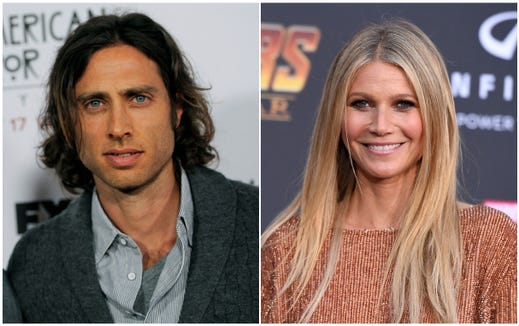 The second time is the charm. The marriage agrees with Gwyneth Paltrow, she shared in a new interview. with Glamor UK on Tuesday.

The actress and businesswoman went crazy when they talked about her new husband, writer / producer Brad Falchuk. After the author of the article, Josh Newis-Smith commented "his energy and warmth are palpable", Paltrow complied with his man and replied: "Well, you have to thank my husband!"

The welfare advocate revealed her new marriage to Falchuk in late September, sharing a photo of her hands hugging and putting on gold bands on Instagram. They tied the knot in a discreet ceremony in the Hamptons. Earlier this year, they confirmed their commitment in January.

When asked about his second marriage, Paltrow spoke to Glamor. "It's fantastic," she shared. "I feel very lucky and I am very grateful."

She added: "It's different to be in the middle of the forties, do it again and bring all your experience, your pain, your happiness, your suffering, everything, really, it's very encouraging, I feel very optimistic."

Paltrow, 46, separated from musician Chris Martin after a decade of marriage in 2014.

Speaking of Goop's ability to put women's sexuality at the forefront, Paltrow explained: "One of the things we really try to do is eliminate shame. Women, I think they are very embarrassed about their sexuality: we have been conditioned in that way for a long time. We feel that if we open conversations, we sell a product and we give it a light, the shame begins to dissipate. "

Perhaps, giving an idea of ​​her own sexual life, she continued: "Women should have an excellent and satisfying sex life! I think sexual health is important for the general health of women. "

Plus: Gwyneth Paltrow is perfectly aware of how unpleasant it may seem, thank you very much.

Plus: Dakota Johnson is NOT pregnant with Chris Martin's baby, despite reports